Excerpt from Oscar of Between, Part 6A

Iowa. The Des Moines River. River of Oscar’s youth. One big rock in it, on which some anonymous person repainted in large, white block letters: “JESUS SAVES.” Every summer.

The farming community’s way of measuring accumulation of precipitation: “The river’s above JESUS SAVES this morning!”

2008. Floods now of Biblical proportions in Iowa. Scorching temperatures in Toronto. Vancouver’s “June-uary” the coldest in 53 years. Nature turning its back on our calculated bottom line.

Vancouver. Writers’ event. Elee (an emerging writer) asks: “How was your trip to London? Did you do any writing?” What to say – Oscar quickly assesses – decides to take a risk. Abridges: Time Out “Museums” listing jumping out at her; sense of a nascent narrative circling her; immediate revelation upon entering camouflage exhibit; lifelong inexplicable bewilderment exiting her body. Oscar notices Elee’s deep attention; softening of body; paling as though something is reorienting within her; then flush of face as Elee responds. “That’s amazing. I really felt that.” Then. Their mutual recovery. Oscar quietly stunned.

Camouflage: “the art of survival.” Not born into it. No fur no shell nor feathers nor scales to protect from predators. Must be taught. Oscar & her mother: failure to imprint.

Vancouver. Fall of 2008. After fourteen years of a long string of rentals and sublets, Oscar has a home again – a small condo apartment with private patio on Charles Street.

As she stands at the sink, doing the dishes, Oscar wonders about it, yet again: how is it that she was never taught the basic survival skill of camouflage? Then, a surge through her body: might her mother have unconsciously believed that Oscar would be safer without it? Thwart abuse (sans female camo)?

Just what is the difference between
camouflage and an imposter?

2013. Charles Street, Vancouver. Oscar selecting and revising excerpts for posting on upcoming July Oscar’s Salon. Noting, now, that she never responded to this previous question she posed to herself five years ago. Oscar goes to dictionary given to her by her parents in 1982. Re-reads her mother’s inscription: “We hope this will be helpful in your future writings.” Writings (and subsequent books) that Oscar never mentioned to her parents; nor did they ever inquire about after. After Oscar gave them a copy of A Gathering Instinct. Her first book. Oscar’s brother visited shortly after. After that. Was privy to their mother’s plan to take a razor blade. To Oscar’s book. Cut out the first 20 pages. Pages about the demise of Oscar’s marriage. Before. Before her mother would show the book to her sisters. On the strict. On the strict condition that they never. Never. Never mention it to their husbands. Nor, for that matter, anyone.

It becomes clearer. Clearer, as Oscar considers the etymologies and definitions of camouflage and imposter.

Imposter, imponere, to put on … A person who deceives under an assumed identity …

Yes, Oscar had. Had recognized camouflage as a strategy and signaling of membership – even a duck hunter alone still uses the same camo gear, blinds, decoys that other duck hunters use.

Whereas, an imposter not only puts on (here’s the rub) but assumes another’s identity.

Imposter = individual & unauthorized
In the absence of camouflage – the underlying suspicion then –an imposter?

Not really a normal girl nor suitable daughter not a welcomed member of the literary community not a proper wife nor without question woman, not a normal employee nor the real mother not a loyal American nor true-born Canadian not a conventional administrator nor an easily qualified pay-cheque mortgagee not lesbian-read lesbian writer nor automatically included en famille not housed in an acceptable body nor ______________: membership questioned at every turn. 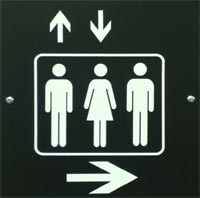 Excerpt from Oscar of Between, Part 9

October 2008. A Canadian Prairie city. Oscar becomes Charlie on Halloween. At her son’s request – he is dressing up as Chaplin and wants her to too. This surprises Oscar but she agrees. At the school Halloween party, then the next night Trick or Treating, some respond to Charlie Senior and Charlie Junior with delight. Most do not. Only focus on Junior. More say. Say nothing at all. Are uneasy. Coolly stare.

Sr. & Jr. enjoying themselves despite the conundrum.

Three weeks later Oscar considers Charlie Sr. & Charlie Jr. connotations. What was her son’s longing? For a brother? A dad? Or simply someone else who was the same as him for a change? One thing is clear: for the first time, they shared the same markings. Signaled family. Undeniably.

The difference between costume and camouflage? Oscar’s son was in costume, but Oscar? Oscar now thinking she was in camouflage. Not intentionally but at the invitation of; then default of. Disruption of others’ expectations. Charlie Senior’s gender not automatically evident. Vexation. Who, exactly, was pulling what over whom?

Suspicion that Oscar was. Was. An. Imposter. 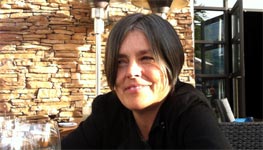 My story becomes a betrayal in the writing down of it. It’s a sordid little deal: in exchange for exposing the suffering and death of other people to any Tom, Dick or Harry who might happen to read my words, I, their murderer, get my life back.

Grandparents, godparents, aunts, uncles or cousins: I could whisper the description of the victims’ last minutes to them, but not to a stranger who never loved them. (That word victim, how I loathe it. The people trying to cross the border were people. People dying of thirst and hunger. They should not be portioned off. They should not be defined by the genocide in any way. Only we genociders should be defined.) I don’t even know if this journal will be read and, if so, whether my theoretical reader will indulge in the schadenfreude that they at least are still alive or, worse, get a manic jolt and a whiff of omnipotence, or whether the pleasure of power over others might get ignited in their sympathetic nervous system.

Writing is pornographic. It is like forcing prisoners to perform a striptease of their suffering in front of an anonymous crowd — the exposing, a final sadistic posthumous indignity.

I grasp my head between my hands and squeeze.

They’re dead, I whisper. What expense to them if I pinch their pockets? What skin off their backs, so to speak, their souls already long released, if I tell their story to save my soul?

I get up to pour myself another depth charge. My hand is shaking. I’ve lost count, but I see that I’ve just wrung dry another bottle of R&R that hours ago was full. There’s still one more full bottle waiting under the kitchen sink. I haven’t been outside in three days. I haven’t returned the boss’s text messages. I’m not sure I’ll ever go back to work. I haven’t slept and I’m down to a jar of pickles and a box of stale crackers.

When I told Ruby about the genocide on the border, the words were warm from my breath, but when I wrote them down they turned hard and armored and this disgusts me. Of course writing doesn’t destroy memory, as Plato claimed so many years ago. I’ve known that since just after I started writing this journal, yet it does alter memory and it destroys living memory. I thought that might be enough. Who can shoot the written word? Who can punish it or kill it? Does it die from lack of oxygen? From a broken heart? From shame? Can it lose its soul? But writing also turns private memory out onto the street like an underage runaway and leaves me feeling like both a pimp and a john, as well as a murderer.
Just as well.

Instead I’ll keep guard over the only thing left to the dead: their place in my living memory. Without memory the dead don’t exist. I’ll keep them nestled in the warmth of the pinky gray plushy folds of my brain, singing their requiem with electric pings leaping from neuron to neuron, spreading out in myriad branches behind the armor of my skull, their existence only as immortal as myself, tender and private as long as we both shall live. I will heave my shoulder to the door and use my mind as a weapon to keep the swarms of oblivion and indifference away.

I have arrived at the exact opposite result of what I intended. The memories I sought to destroy I’m protecting. I’m so tired. I’ll pour one more R&R so I can slip back into the black velvet arms of sleep.