From Oscar of Between, Part 35 Excerpt

Two weeks ago Oscar driving on Pacific Avenue heading towards Kate’s. It’s an elating sunlight-reflected colours fall afternoon. Since she left Ingrid’s, Oscar’s been glancing at a spider bouncing and twirling with the rush of air repeatedly having to repair its web strung between driver’s mirror and car door. For the last few blocks, Oscar’s noticed a second, smaller spider that’s retreated to the inner lip of the mirror. Is it cowering there? Or, is it smart and just wanting to stay out of the wind?

The larger one notices it tucked in there. Menace pulses out from it (is Oscar imagining this?). It swings over on a guy strand and lands close to the small one, which immediately darts to the other side — its terror palpable. Oscar wants to intercede but traffic is too heavy — she’s caught in the web of this story, gripped by the larger spider’s absolute intent to kill radiating from its body. It forcefully swings to the other side of the mirror and the smaller one darts away two more times, its throbbing fear is astounding. On the fourth attack, the large one strikes, bites, wraps it, attaches it to the mirror’s lip.

Oscar finds a parking spot a few blocks from Kate’s, unnerved by what she just watched. Was already feeling vulnerable about attending this informal gathering about “the role of the poet.” Oscar, not invited for decades, was surprised to be. Feels a bit like that small spider.

Kate’s apartment is full of light and pleasant anticipation. As each poet arrives there’s a gathering excitement as this kind of conversation so rarely happens. People help themselves to food and drink, chat, then seem to casually move about as they test who best to position themselves next to.

Once all have alighted, we decide to each speak briefly about how we perceive our role as a poet. When the speaking begins, there isn’t the typical posturing but rather a probing sincerity. Kate and Renee intentionally invited an array of poets so there’s little jockeying and no one group of poets dominates. Oscar resolves to speak as openly as possible; break out of the silence. Her turn. She takes in a deep breath, then begins:

“I stopped writing poetry many years ago (for reasons I won’t go into right now) and have been writing lyric prose. That said, whatever I write I write with the mind of a poet; I think like a poet. For me, the poem differs from prose because there’s an urgency in its very form. In an essay I wrote years ago for Breathing the Page, I say, ‘The poem enters your heart like an idea enters your mind.’ This urgency shapes how I write lyric prose. For me, my role is to be fully present at the threshold of awe, awe in all its meanings: wonder, dread, reverence and fear.”

As the speaking continues, others pick up on what Oscar has said. This surprises her yet she makes no assumptions. Oscar, now at ease with between, is likely never to be among.

Oscar. August 2014, on the Great Western hurtling 120 km/h toward Bath. J and Oscar’s son in their assigned seats reading; surfing. Oscar. Standing at the open window between train cars — in unexpected ecstasy — the force of movement and rushing air without impediment or enclosure provokes a state of high alert: pure sensation. Intensified by flashes of copse along the track that speed transforms into pixelated colours.

A few weeks prior, Oscar sitting in a public space with eyes closed when a sudden whoosh rushed over her body: “What was that?” Her eyes bolted open: it was merely a man walking by. Oscar discombobulated. How could she not have been aware of this before? It happens all the time but we become oblivious to the wake we make. Believe ourselves to be separate, even “alone.”

October 22, 2014. A Quebec young man walks up to the Canadian War Memorial and shoots the soldier on duty in the back, dead, then runs into Parliament where he is shot dead by a guard.

The massacres and murders by deeply disaffected North American men mount and mount. As do the gun sales.

February 2015. Although carrying concealed weapons on campus is banned in forty-one U.S. states, the gun lobby is fighting back. A Nevada assemblywoman recently opined: “If these young, hot little girls on campus have a firearm … the sexual assaults would go down once these predators get a bullet in their head.”

The New York Times, March 8, 2015: “Half the people on the street are dressed to kill. Every second woman on the avenue and every second man on the town and every other kid on the jungle gym has his or her back clad in army green … this year’s models evoke the M-65 field jacket worn by the United States troops in Vietnam …” 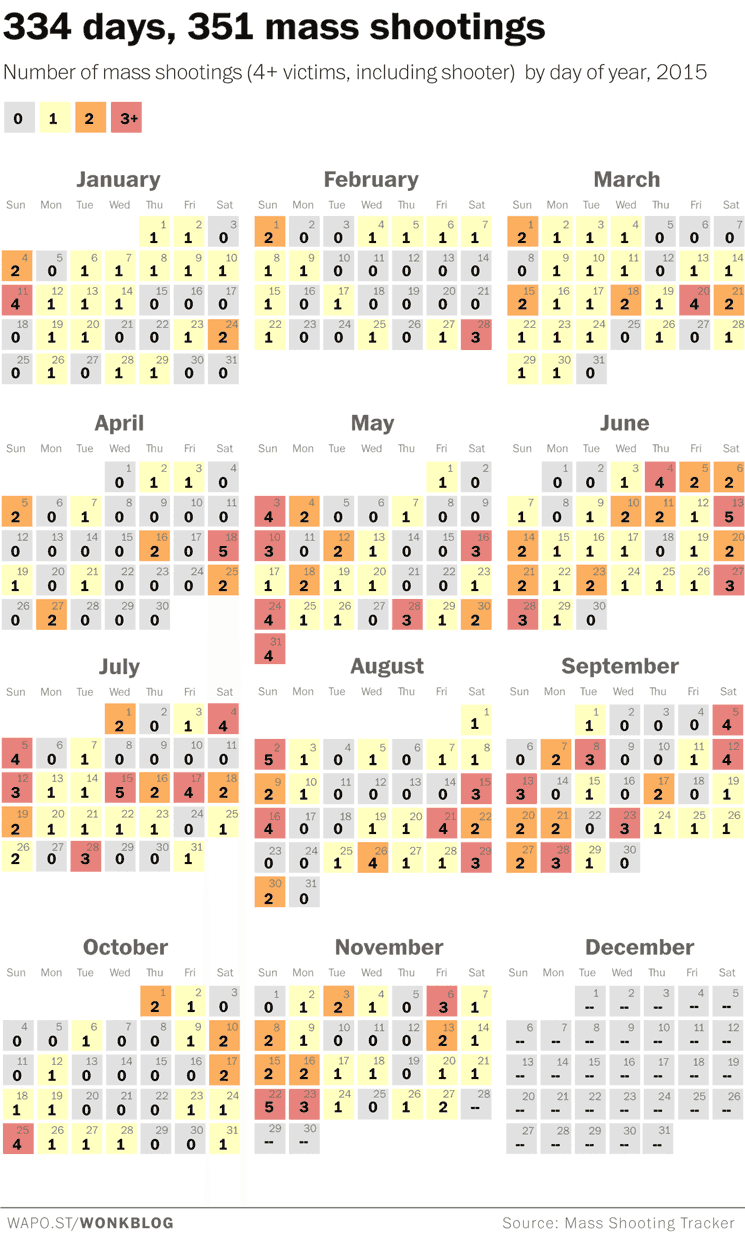 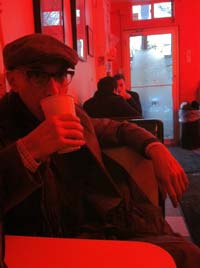 From: Medium Point Blues (a work-in-progress)

Nearly unburdened, I approached
that pier where hate flows –

can there be a new Jew? Perhaps, but who’ll remain
to make such distinctions

for an end does come, though not the one
you’re praying for – darkness is a cipher

between us – the interminable –
what cannot be touched

no place beyond/ site plowed under
by garbage and thawing ice

alone/ the world is written –
where ceases abstraction

itself – a sphere
that outlasts all arising

cut into earth/ ocean and sky –
what wakes the mind

composed – where all quieting is
ink bled into paper

an ear opens, manifold in its perception
appointed as hearing/ as absence –

amid the drove of city life
beneath the light-

duress within
read as/ escape what is written –

in opposition to all definition
sounded in mind

this aversion sustained
the paranoiac says “no – 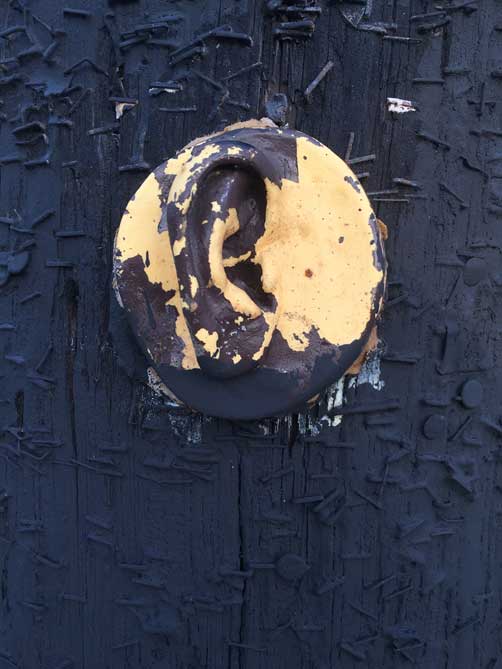 The rush toward word-stuff the ‘answer’ (they swear) a reframing
the taking of another’s and naming it the same// all imitation’s carved
of ancient rock/ its summit approached from below. No upper limit/ no
lower edge exposes the cross retold/ as theft is uncreative roam
or road, through woods well known/ a trans-script delineated as
poem/ where authorship adrift is seized by name – a campaign
bearded by bard in feigned innocence/ of relations machinery
where lies/ the white lines no encampment can alter

through faked obscurity/ behind that masque
of authorship, no alibi sciences an approach
no laureate for those drafted fame-ward –
be they white, black or gray.

Hear, hear – old energies are daily renewed/ alive
in the air of all tradition – that node

no longer/ an echo of old poet pound
-ing out his history as poetry
nor a treatise on Troilus and Cressida, nor
a beer-barrel concealed codex, nor what forms
a risen corpse, nor a post-pagan lore that carries
the reader/ upon its hendecasyllable meter/
arisen from a wooden foundation, ruined upward
over untold millennia, nor a stone tool, imagined
dead/ imagined real –

each trans-translation through the actual/ sound-sense of things
beneath that strange uncoupling, beneath all penning – what
elides an author soon touches writer then reader where nothing is
contained – the word exposed/ removed of letter and envelope
unfurls to reveal interstices of lineation/ a notation of need sought
spontaneously – in submission/ that is primary – the word works as it
breathes – works made clean – not by bone or star / not by thought
thought through intelligence/ but by wisdom’s unknowing

beyond origin/ beyond end –
our passage informs our delight – writer, inscribe
by that old and awe-full light, emptied
of the etymon of prophets 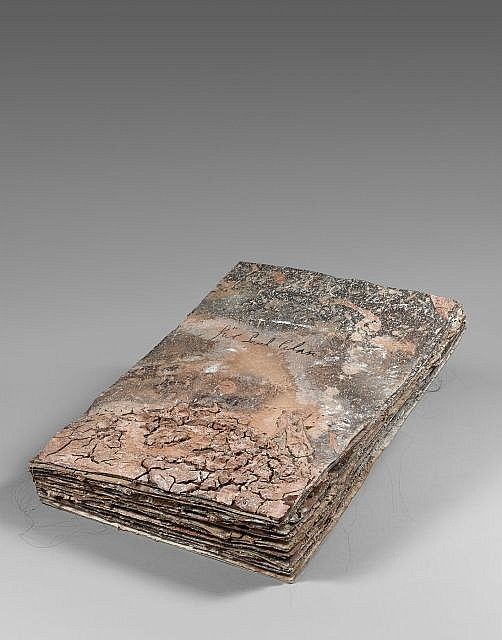 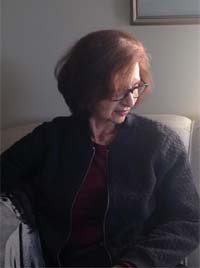 That’s where I find Oscar writing, and Oscar reading us. Where Oscar’s readers write and read each other. At first I was lost in the salon’s public, digital fragment/response form—I wanted book. When Oscar of Between launched, Oscar read aloud, gave us other versions, other structures. Oscar could ex/change form between salon, readings, book. Book closed the circle and the light came on. From the inside passages of memoir to dialogue in digital community, Oscar is for the possibilities of form, and for a politics of reading. And that’s how I read Oscar.

Colette Gagnon is a visual artist and writer. She has lived, worked, and studied in Edmonton, Toronto, and Vancouver where she now resides. She holds an MFA from Yale and a BFA from UofA in painting. She writes poetry and memoir, and completed TWS at SFU (2003) with Betsy Warland, as well as VMI (2008). Her writing has appeared in emerge 2003, vertigo west/one, and locuspoint.org. Since retirement in 2012, she has returned to her visual practice. Her recent collection of drawings entitled This Metastasis was exhibited in The Library Window Gallery at Emily Carr, Aug 2016.