From Oscar of Between, Part 32 B Excerpt

The Greater Victoria Highlands forest. Beth and Oscar have just had a silky swim in the intimate cupped hand of Eagle Lake. Beth’s telling Oscar about her new writing project, “invented histories.” She’s questing for the way obfuscated memories are housed in bone marrow and cells from the beginning of her life, for this is her only option. She hasn’t even a birth certificate. Beth’s brought a copy of one of the poems for Oscar to read. It has a quiet, oracular feel that magnetizes Oscar. Beth comments on how these poems seem to bewilder other poet friends.

“I can relate to that!” Oscar replies.

“You mean to your new work?”

This is so rarely acknowledged, Oscar checks.

“I’m most aware of it in a group reading. It often feels like I am coming from such a different place than other writers.”

After the attack on Pearl Harbor, he enlisted and was stationed on a Navy supply ship for fourteen months. Utterly bored, he repeatedly requested a transfer to a destroyer but his commander repeatedly denied his request. To counter numbing monotony, he began writing vignettes about the small dramas being played out on ship.

Discharged in December 1945, he returned to New York where he’d worked as an editor at Reader’s Digest. Began writing Mr. Roberts. It sold over a million copies: he became “the toast of the New York literary scene.” The 1948 stage version, starring Henry Fonda, “was a smash” success.

He died in his bathtub a year later. 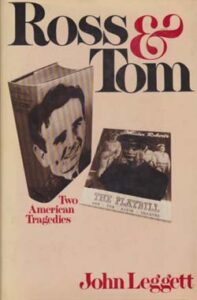 His name was Thomas Heggen. He was an excised relative. Here, Oscar thinks of her mother’s plan to take a razor blade and cut out twenty pages of Oscar’s first book. How, subsequently, she never mentioned the existence of her other books to her parents.

Oscar knew nothing of Thomas Heggen.

Then, her brother Steven discovered a new book, Ross and Tom: Two American Tragedies. It was an account of two first-book-hit authors living in New York who soared. Stalled. Committed. Suicide. 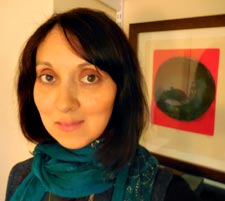 Vancouver, BC
Rahat at Talon Books

ACTS OF INSCRIPTION
from a work in progress by Rahat Kurd

Who will record, who will accept, who will carry
our acts of inscription?
Some of us are placed in the world
at awkward angles to states of being
others may serenely take for granted –
left agape, unable to imagine
speaking all one language in a family,
worshipping together in the same rituals.

In my family, each one of us is gripped
in the dissonance of the other’s awareness.
If I could possibly relate to you,
who on earth would I be?

To relate is to follow
the outlines of someone’s life
until the moment they become legible,
to discern the entry point and seize it
and say here’s my chance, here I am.

When you read a book containing
no entry point, no sign of your existence,
you must write yourself in.
The danger is that the book
will make you so estranged from yourself
that you will not be able
to compose the courage to grip the pen.

There were no books: when my parents moved
to Hamilton, a few years apart
in the nineteen-sixties,
each of them, from different cities
behind different borders
relating to each other or failing,
across partitions and prejudice,
at awkward angles. There were no books
when I was born, that spoke
of Muslims, or Urdu, or Punjabi,
or the drawing or erasure of borders,
or of even earlier migrations from even further mountains,
of someone having once come
from other people with other languages —

Here is what I decided to do:
Write myself in. Christianity was
everywhere, unavoidable
as churches on every corner,
emphatically not mine,
but the birth of Jesus,
echoed in the Quran,
was a door left open
for the Muslim girl to walk through,
to inveigle herself
between the tinsel angel
and the hunger of the little matchstick girl.
Writing ourselves in
as outlaw, like the alif of the Sufi
on the wall that crumbled under the single mark —
more thrilling than any received narrative,
bound in green, stamped in gold.

I’ll tell you how it was in my family
so you may consider your own
angles of strangeness; how attentively,
with what tenacity
you love and hate.

The day after he landed in Toronto from Karachi,
my father took a job in Hamilton,
at the Dominion Glass Company.
Two blocks away from the factory,
in idle hours in our house on Lloyd Street,
I leafed through the Employee Manual, a small volume
sealed in bright orange and purple vinyl,
inside, six metal rings
clasped a sheaf
of funny little six-holed blue-lined pages
that were a pleasure to turn by hand — 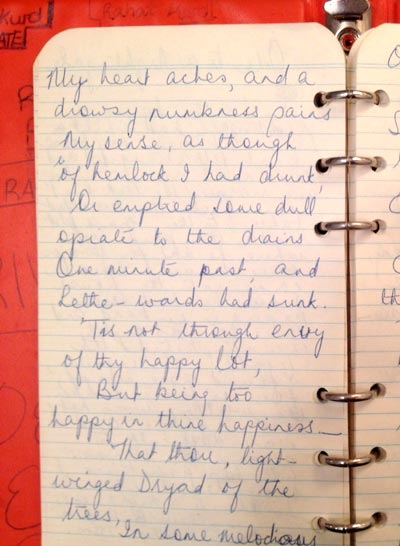 I turned them often, reading
not the rules of glassmaking, not the safety protocols,
but English poems:
Shakespeare, Coleridge, Wordsworth, Keats,
some typewritten, some in my mother’s elegant,
forward-slanting hand; one poem
in her younger sister’s
smaller, rounder, upright letters: Milton’s
“On His Having Arrived at the Age of Twenty-Three”;
clear evidence of how each newcomer
strove to keep poetry in her life
in fugitive pages,
so between Quran lessons
and Pink Panther cartoons
my thoughts could vaguely wander
to daffodils and caves of ice;
to a man who sat under a plum tree for hours.

I ignored or forgot it for months at a time,
then at fifteen made the notebook my own:
lists of songs, funny things overheard on holidays,
letters to write and await in the mail,
in sharp slashes of boastful green ink —
I carried it for a summer, then cast it aside.
After the Dominion Glass Company
shut its gates, after my mother left Hamilton,
the Employee Manual came into my hands again —

My sister Rabia
had written her name
over mine on the orange vinyl
in blue pen, ten years later,
asserting ownership, warning, PRIVATE,
PRIVATE. Inside the back cover,
the faded drawing of a sulky little face
in a party hat; somewhere near the back,
the middle-school confession,
“I hate Micheal Barneby.”
I laughed and laughed:
once, in the same handwriting,
she had left a note on my fridge
claiming Grace Stepney had called.

I think of the ring-bound pages
both transforming the writer
and being transformed
every time it passed into new hands.

I keep the book as record
of the raw power
of the act of inscription,
sparking the me too, me too
desire to emulate
the mere gesture, and more than the gesture —
the will to survive —
to take possession with a pen
of each successive wave
of strangeness that threatened,
but never overwhelmed us.

Vancouver, February 2016
Note: Grace Stepney is a fictional character from House of Mirth, the novel by Edith Wharton. 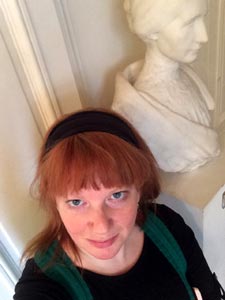 I read Oscar Salon because the scroll of voices has the sense of an ancient manuscript. One voice, then another voice, and then a comment section that seems like annotations.

Jennifer Zilm is a 2013 graduate of SFU’s Writer’s Studio where Betsy Warland taught her how to use scissors as a writing implement. She has a background in biblical studies, archives and libraries. She is the author of the chapbooks The Whole and Broken Yellows and October Notebook. Her first full length collection is Waiting Room (2016, BookThug).