From Oscar of Between, Part 32 Excerpt

Victoria, mid-July, 2013. Oscar familiar with Victoria; has numerous friends here but this a new here she’s been plunged into: a house-sit with a massive garden to tend and beehives to navigate. On Acton Street in an enclave of houses shored up by large Garry oaks on all sides. Their prehistoric reptilian bark and dense, leafy clusters at the ends of their branches comfort Oscar. Garry oaks grow only on the West Coast and its companion islands. 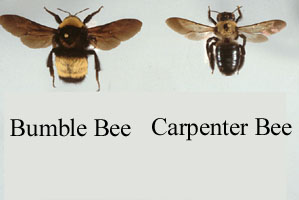 Two large hives. Oscar and bees gingerly becoming acquainted. When they buzz around her (don’t bat them away!) she hums the note they make and this seems to ease their uncertainty. She watches their typical fourteen-hour workday: constant stream of ninety-degree-angle ascent and descent to and from control-tower hives. Two days ago, after house and garden orientation tour, Merrie-Ellen, Christopher and Oscar chatted. Christopher, a composer, has a garden studio adjacent to the beehives. Oscar delights in the bees’ music and tells them of an Oregon seaside indigenous plant that opens its flowers to only one kind of bee to pollinate; a female carpenter bee that changes its note to a frequency the flower prefers: middle C.

To note each other accurately; to be noted accurately: what we all long for.

Half an hour of hand watering done on the front garden and timer-set sprinkler set on the side garden, Oscar now having breakfast on the narrow back porch. Morning sun is angling in wherever it can find openings through the Garry oaks and house next door. The continuous ascents and descents of the bees catch morning light on their backs and look like shooting stars.

Thousands and thousands of leaves and petals a-flutter. Oscar is listening to Ann Southam’s “Webster’s Spin.” It sounds remarkably like bee-music.

The complexity of watering schedules and methodologies that initially overwhelmed Oscar now familiar in this here of here. Oscar doesn’t begrudge the hour plus of watering required morn and eve. It instructs her in the garden’s language. 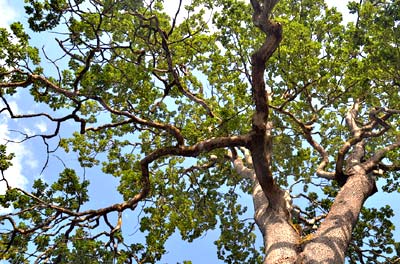 For such large trees, these Garry oaks are considerate trees.

If you were to think of leaves as hair, the Garry oak is not a big hair tree but more a clustered-at-the-ends-of-its-branches pubic hair tree sharing sunlight with all in its surround.

Sitting at the round wood kitchen table with the top of the Dutch door open, Oscar gazes over the layers and layers of garden foliage, past the tall, greying wood fences to the largest Garry oak on the other side. It harbours moss in its lower bifurcating limbs’ crotch and has arranged all its graceful limbs in an easterly orientation so its secondary limb can drink in the western light.

Oscar thinks of Orlando writing her poem “The Oak Tree” for 300 years, keeping the rolled-up manuscript on his chest, then later, between her breasts. Sometimes forgotten, sometimes delighted in, sometimes reviled, “The Oak Tree” Orlando’s only companion to weather all the changes in life over 300 years.

When “The Oak Tree” was in its seventh edition and had become the source of much acclaim and controversy, Orlando vows that all this “was ill suited as could be to the thing itself – a voice answering a voice.”

Orlando’s vow. Oscar will hold to her chest for the rest of her life. 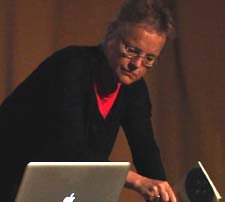 Video capture from a performance of Book, 2015

Notes on Oscar Mix
Sound, image, actions and equivalence vibrate the text. Oscar tends to the garden, listening: to the drone of bees, the movement of leaves, the tones of Ann Southam’s music, the capability of a flower to shift frequency to attract bees, thinking “to note each other accurately; be noted accurately: what we all long for.”

Oscar’s heightened senses, fusion of the heard and the seen, and attention to sensuous details of experience are my inspiration. My approach to the text was conceptual using the seven sections of the chapter as a structure for composition. In duration, each movement corresponds to my reading of the text, aloud.

As source material, I used a performance of mine, developed around “Book,” a poem from Gertrude Stein’s Tender Buttons. In the performance, I layered spoken word recordings, objects and actions with digital processes to manipulate the sound. This composition uses samples of the performance relating to the text as sonic image and texture. Sound is suggestive, poetic and evocative in response to Oscar, the garden, the bees and Orlando. As well as to language, play, experimentation and possibility.

How I long to discover that Oregon seaside indigenous plant that responds only to those bees which create sound in the frequency of middle C. 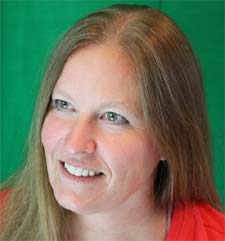 For a long time now I have been drawn to the concept of between-ness. To me, it is something both uncomfortable and embraceable, simultaneously. It is a state of dissonance and possibilities. The Salon gives me a perspective on between-ness different than my own. From Oscar’s viewpoint and from all those who offer their voices to the Salon’s conversational space. Reading the Salon is therefore a chance for me to listen deeply: to stay truly open to the possibility that I will be changed by what I hear. Not only a change in what I know, but also in what I think I know about knowing. In what I believe about how we come to know. And, perhaps just as importantly, in what I perceive might be unknowable.

Jennifer Manuel’s debut novel, The Heaviness of Things That Float (Douglas & McIntyre, Spring 2016) depicts the lonely world of Bernadette, a woman who has spent the last forty years living alone on the periphery of a remote West Coast First Nations reserve, serving as a nurse for the community. It is a novel about privilege, about the ongoing cycle of contact and arrival, and about the dangers of assuming to know the other. A long-time activist in Aboriginal issues, Manuel taught elementary and high school in the lands of the Tahltan and Nuu-chah-nulth peoples. She lives on Vancouver Island, BC.