From Oscar of Between, Part 31A Excerpt

June 8, 2013. Vancouver. Oscar invited to read at the 23rd Annual Virginia Woolf Conference banquet – between the entree and dessert.

Of all her betweennesses, this is a new challenge for Oscar.

She considers. A palate cleanser? Something refreshing, humorous (the typical fare), but this is not Oscar’s forte.

Oscar flummoxed. Every idea of what to read nosedives like an inadequately made paper airplane.

Then Orlando taps her on the shoulder.

Oscar picks up the book, begins to flip through it when this passage catches her eye:

“Orlando? still the Orlando she needs may not come; these selves of which we are built up, one on top of another, as plates are piled on a waiter’s hand, have attachments elsewhere, sympathies, little constitutions and rights of their own.”

The romp and range of Virginia’s intoxicating mind.

Yes. That’s it! Orlando and Oscar.

Preparing for her reading, Oscar carefully turns the pages as she searches for tasty bits. The book’s spine has deteriorated – its pages about to come loose. Orlando quotes here and there jump off the page into conversation with Oscar.

Oscar closes the book. Clears the table for dinner. Notices a strange sprinkle of yellow-gold particles where she had been working. On closer inspection, she realizes they’re dried glue particles from the book’s spine. 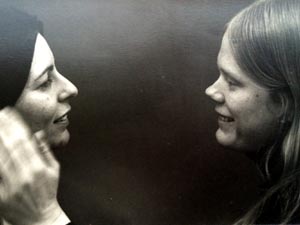 Oscar. That first kiss. 1978. Toronto. Array of hardwood trees in their October colours vibrating in the clear-crisp night. J and Oscar. Strolling and talking; talking and strolling downtown. Drawn to each other in a way neither had known before. Pause in the middle of the green oval in front of Hart House as U. of T. students move through the night as the crow flies. Oscar and J. Pause. In the middle of the green. Grow quiet. Turn. Face each other. Lips close. That first kiss. Unlike any other. Soft spiraling of mutual surrender; defenceless desire.

Twenty-five years spooling forward from this kiss. Three major relationships and then, Oscar retreats. Has been a recovering romantic for the past nine years. Been. On her own. Solitary. As she was in her growing-up years. Oscar. Needing to find another way. Needing to unlearn the romantic-script stock lines and expectations that obscure the vulnerabilities we end up being at the mercy of. 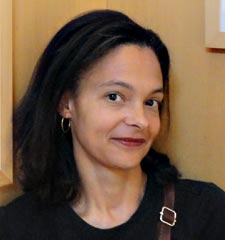 Bev snores. Loudly, lustily. Her arms thrown up around her head. Her nipples buttoned from the chill in the room. Bev snores the way she makes her lattes, heaping with foam, embellished with artful leaves, flowers, once a polar bear’s face, the sheets twined around her opulent flesh like an Italian sculpture. She does not believe in bras. She knows a reliable source for buying weed. She has five children. She left her husband eight months ago. She’s been working at the coffee shop downstairs for five. Her phone vibrates with rainfall, sparkles, chimes, chirps and beeps, because her adult children and grandchildren are always texting her.

Edith rolls over onto her back, fighting sleep. She must get out of this bed. A long cobweb trails from the pink chandelier in the middle of the ceiling. They lie on a mattress on a red Persian rug, its edges rococo-ed with green and gold. The Persian rug she got in the divorce. – Well, I stole it, said Bev. – It was mine.

Edith pulls the blanket up to her chin. Smells her fingers, redolent with coffee bean aroma and sticky from baroque sex with Bev, mother of five, new adventurer of life, café barista and condo neighbour one floor down.

– You’re my new adventure! shouted Bev before they fell into the bed, and she smashed her lips onto Edith’s.

Edith has been here tonight for exactly four hours and nineteen minutes. Now she must get up and exit this apartment. She scissors her legs under the sheets. Dozes. She has an 8:30 am meeting tomorrow with a graduate student. Her big lecture class is at noon, and there’s a workload agenda meeting at four. She still hasn’t finished grading those essays. Bev offered to help Edith grade essays. Edith said no.

Edith slips out of bed, pokes and peers around in the half-dark for her sweater, her jeans. She tiptoes barefoot into the hall, slips on her flip-flops. Pours herself a glass of water. Gulps.

Because Bev works the morning shift in The Kaffee Klatsch coffee shop at the bottom of Edith’s condominium tower. Bev started chatting while pouring Edith’s valerian-laced coffee, pulling the next espresso shot, and when Edith told her she was a professor at the University of Inivea, Bev told her about her ex-husband, – Masquerading as a loving wife to the U of I Dean of Medicine was my full-time profession for 35 years, she said. – Turns out I was his beard. Sasha, one of my twins, she told me that’s the word for it. 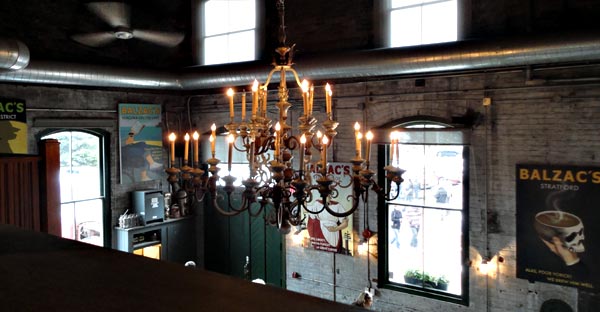 Bev knocked used espresso grounds out of a portafilter.

– I said to him, she said, – you take the house, and give me your sexy fuckpad condo where you met your little twinks for your phony meetings and sleepover conferences. That’s what I told him. I was done with the house, all the dusty stairs, the perpetual cleaning. Laundry. Weeding, god I hate gardening, it’s just all plants, bugs and dirt. Never liked it. My job was never done. I could never go home after my shift.

Edith thought Bev might become a new friend, that’s all, with her flamboyant latte skills and her charming gap teeth. The easy way she talked about kids, coffee, politics, Virginia Woolf, Heinz condiments and different brands of soy milk. The way she moved so musically in her round, Venus of Willendorf body. She thought Bev was just inviting her over for coffee, that’s all Edith thought Bev the barista was asking her. She thought that being invited for coffee to Bev’s condo would be maybe half an hour of idle chatting with a neighbour and a cup of coffee made from exotic, gourmet coffee beans, freshly ground, served in some exotic way, 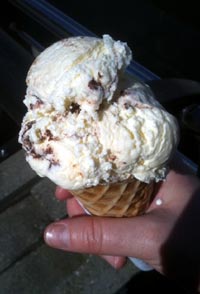 like with ice cream or lemon rind or a sprinkle of yellow gold. Conversation about grandchildren, divorce lawyers, perhaps some discussion about Orlando and how Bev named her daughter after one of the characters. As a neighbour, Edith imagined occasionally borrowing a stick of celery from Bev; maybe using her washing machine for a load or two when Edith’s machine finally leaked and clanked itself to a proper death. But instead the invitation was for sex. Bev couldn’t stand coffee because she was around it all day, so there wasn’t even coffee.

– I’ve got tap water? Bev said during a sex-break, pointing toward the sink. – I didn’t know you were thirsty. 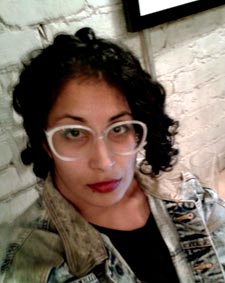 I read Orlando when I was 15, wading into it the way Woolf must have waded into her river. Oscar is a continuity, an un-narrative that asks me to find something there there. Oscar connects, pulls the threads of writerly lives into each other. Oscar reminds me that our everyday lives matter. Oscar asks me to remember myself, to remember where I come from, to remember you.

Kiran Sunar is a PhD student in the Department of Asian Studies at UBC focusing on gender and sexuality in medieval to contemporary Punjabi literature and poetics. Kiran is also working on a manuscript for an experimental prose work entitled “Nerve.” You can find Kiran at coeurdelakaur at gmail.com