From Oscar of Between, Part 30 Excerpt

Orlando. Returns to England from Constantinople Ambassadorship and her subsequent time with the Thessalian hills gypsies. Upon arriving at her country estate a “whole retinue of servants” welcomes her home.

Then, “no one showed an instant’s suspicion” (they being British and being servants). Even Orlando’s dogs suffered not a hair’s width of confusion, “for the dumb creatures … are far better judges of identity and character than we are.”

On Vancouver streets, panhandlers most often are met with suspicion, anger or averted eyes (“you don’t exist”).

Street people streetwise living close to the ground see through who we are as we rush by. Panhandlers’ eyes and Oscar’s often meet; sometimes they speak and, not infrequently, Oscar gives some change (change—what is needed here).

No “Milord! Milady! Milady! Milord!” Street people spot-on about gender for they cannot afford even the most unintentional insult. 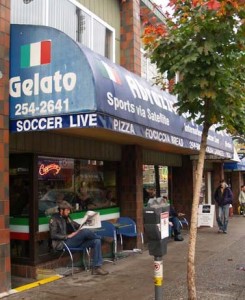 Mid-morning East Van sidewalk, men sit at small tables in front of Abruzzo’s old-style Italian cappuccino bar. At the far end, an older man by himself is sizing up Oscar as she strides comfortably along. She does not avert her eyes from his stare and he knows she’s watching his eyes move slowly down her body

still look back at him, look down,

or, say something to pivot it?

She remembers she is wearing her new men’s Italian sandals and says to him:

His eyes flash up to her face.

Then he gives her the thumbs up. 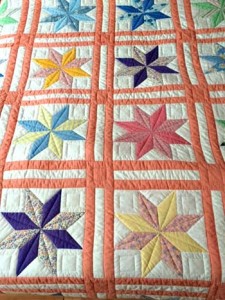 Oscar’s been house-sitting for her friend Clarissa. After waiting nine months for access to a clothesline and a sunny day, she’s just hung out the hand-made quilt her grandmother sewed for Oscar’s future wedding present when she was still young. Clarissa’s house is densely populated with mementoes, paintings and photos that span five generations of her family. Oscar has a handful that span three generations. Oscar’s lineage is mostly stored in gestures like hanging the laundry outdoors. Until now, this has only been an option when she’s at Denis’ in Montreal. This morning, she inhales the ozone timelessness of it, quietly delights in her understanding of how to judge the weather, right time of day, which direction to face certain items, how to consider distribution of weight (know where to pin the heavier and lighter ones), how to maximize use of limited space (socks between legs of pants), while she savours the sparkling allegro of the house sparrow; anticipates the heady mix of sun and garden fragrance-infused dried clothes when she slips into bed that night.

Oscar leaning into writing about Newtown first grader Ben Wheeler’s grieving parents who spoke with such gentle intelligence about the urgent need for Americans to stop stockpiling weapons, or, leaning into her agitation about the twenty-something-year-old Germans (cans of beer in hand) giggling as they played hide-and-seek in the Holocaust Memorial, or, leaning into Orlando’s belief “No passion is stronger in the breast of man than the desire to make others believe as he believes.” But, no. This morning Oscar writes about the art of drying clothes outdoors, passed down to her from the long line of women. 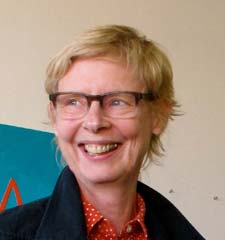 Dear Oscar,
I am very happy about your new sandals and your interventions. As it is now October, and raining, I think the sandals must be tucked away and you, probably still intrepid but damp. On looking back through your Oscar posts I am reminded and delighted that I was able to facilitate a fruitful retreat for you in Montreal, and that Denis’ picture and writing, and breathing and beard, and you, and others, have been forging something I’m now part of.

We set it into a river and made its pages breathe water, open, float apart, swim. This is documented.[1]The book is Masterpieces of 20th Century Painting by Doreen Ehrlich. Now it is dry. Damaged. Pages fold and harden into each other; images—partially exposed—interrupt narratives of decades before or after. Next, I decide to make paintings in this book. I paint shapes extracted from 20th century women painters’ works into the open ruined pages.

I am damaging the book a second time.

It’s a physical alteration of the material of the book and the progress of its time; re-ruining, re-placing. It’s like a voice-over applied in paint. Paint is viscous. Oily halos form around the images I make. The paper is sucking the oil from the paint in the ruined book. Suck, suck, suck; Mondrian, Picasso, Baselitz. Oil seeps into O’Keefe, Riley, Rothenberg, softening everything. I am laying a map of leaking borders—traces from the spaces of women—across pages of a familiar and internalized art history.

The book is a body: linseed oil and surfaces, brittle and entropic. 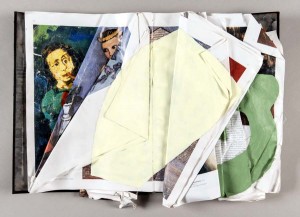 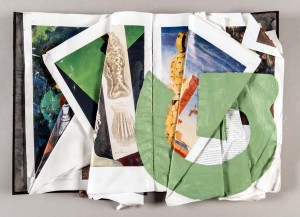 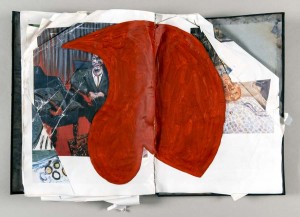 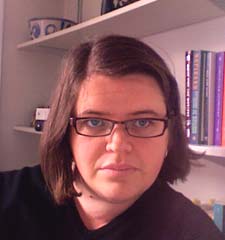 I feel an ongoing connection to a writing community I miss through my reading of the Salon. The way in which the texts here explore connection – both within themselves and between each other – gives me new insight into the way connection functions. This helps me think about my own links and attachments to people and places in disparate parts of the world in new and productive ways. These ideas spin around my mind and need to be written down and written through. As identity, perception, acceptance and complexity are interrogated in the texts, my own sense of self is strengthened and simultaneously my sense of belonging is enhanced. The writing here reminds me how expansive the possibilities of text are, and encourages me to push against the edges of the page in my own work. The Salon gives me pleasure, insight, wonder and a chance to discover. It refreshes me and spurs me on. It’s a writing prompt and source of inspiration. I have much to learn, and Oscar’s Salon teaches me.

Jane is a writer, reader and editor currently living in London, UK. The plan is to decide a piece of writing is finished one day soon, and send it out into the world for others to see. The plan is also to live by the sea again before too long. And to have a dog or two. But the writing thing first.