From Oscar of Between, Part 18C

It doesn’t end there. It never ends there.

Since Oscar returned home, the dismemberment murder in Montreal. Videoed and posted on the Internet. Reported to the police. The police dismissed it as fake.

A severed hand mailed to an M.P. in Ottawa.

The torso found in a garbage bag on a Montreal sidewalk.

Week later: the other hand; foot. Mailed to Vancouver elementary schools. Then.

The “person of interest” is recognized from an internationally circulated photo. Police called. Is …

He was an immigrant student.

His parents want to return all his parts back to China. Otherwise, he will not rest peacefully.

“… a group of artists removed themselves from the official Association of Berlin Artists … after the association succumbed to pressure from Kaiser Wilhelm to shut down a show featuring Edvard Munch.”

In Munch’s painting a male figure foregrounded on bridge —

shattering sound emitting from his
mouth. 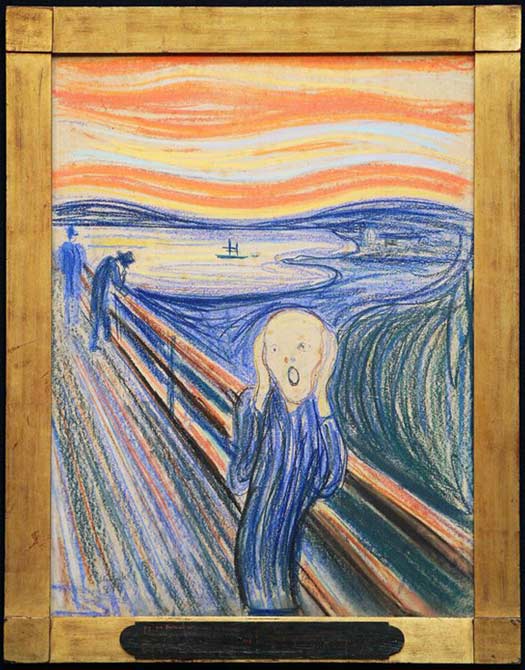 The Scream, Edvard Munch, pastel on cardboard, 1895
The poem by Munch on the frame reads:
I was walking along a path with two friends – the sun
was setting – suddenly the sky turned blood red – I
paused, feeling exhausted, and leaned on the fence –
there was blood and tongues of fire above the blue-
black fjord and the city.

My friends walked on, and I stood there trembling
with anxiety – and I sensed an infinite scream passing
through nature. 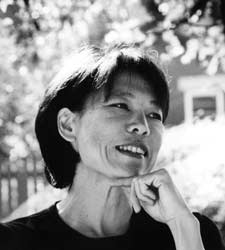 Ottawa, ON
a convocation speech I gave this summer
my return to teaching at Sage Hill next summer
my most recent book

Excerpt from The Girl in the Picture: The Story of Kim Phuc,
the Photograph and the Vietnam War,
Penguin Books, 2001. By Denise Chong

The morning of June 9, 1972 unfolded in the village of Trang Bang with an air of resignation. Soldiers opened a detour around the burned-out highway and began clearing the marketplace of debris from buildings that had been damaged by mortar fire. Villagers forced from their houses made their way back, only to find virtually every home had sustained some damage.

Tu and Nu made their way past the scarred temple, its singed and pockmarked walls draped in solidified napalm. The footpath to their house, still wet in places with water that had spilled from severed plants, was littered with tailings of mortars. The bombing had also exposed a network of tunnels dug by the Viet Cong.

The couple saw that their own house, though badly damaged, still stood. Nu had to hold her shawl over her nose, as the closer they came, the stronger was the stench of death that emanated from the landscape of broken masonry and tiles, decimated trees and blasted earth. The couple went only as far as the gate. The only sound was the buzz of flies. Nu noticed the rotting carcasses of her two swans in front of the veranda. She thought of how she would miss their loud shrieks and the way they would nip at approaching strangers.

The couple set out on their mission to find their missing youngest daughter. They joined streams of foot-weary refugees on the highway towards Saigon. Several hours later, they got nowhere at the hospital in the town of Cu Chi. Staff there insisted that they had not admitted a child burned by napalm answering to the description of their daughter, and would not have because their hospital had neither the facilities nor the staff to handle such burn victims. They advised the parents to try Saigon’s largest hospital, the Cho Ray.

By then, day had surrendered to night and to the Viet Cong. Tung and Nu spent the night on a stranger’s veranda in Cu Chi. The next morning, they continued on foot. Several hours later, at Saigon’s Cho Ray Hospital they draw another blank and were told to try the city’s other hospital, First Children’s Hospital. By then, it was dark. The couple slept outdoors a second night, this time on a stone bench. At sunrise, they walked across the city to their third hospital in as many days. They were met with the same denials that their daughter had been admitted. Indeed, it was rare that newly-burned victims of war turned up in Saigon; typically they died before reaching even the nearest hospital.

Before the couple could admit defeat and begin a search of the city’s morgues, they decided to conduct a search of this last hospital themselves. The eight-story building had several wings. Floor by floor, corridor by corridor, room by room, they sorted patients from crowds of relatives bathing them, changing dressings, feeding them. In desperation they lifted cast-aside bedding and looked under piles of shoes outside each room, as if their daughter, untended, might have been pushed aside there. After several hours, they found themselves back on the ground floor.

They sat, exhausted and spent. 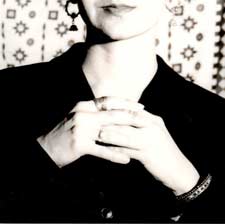 Oscar asks: “Perhaps memory is not so much ours as we are its. We being merely a vehicle for it. / Its worker bees.”

Writes, despite intimate negotiations with silence. Crosses borders, sometimes inadvertently. Recent publications include: 1st prize, Room 37.2, a poem in Room’s forthcoming Translation issue and an essay on grief, honour and post-9/11 life in Wasafiri 77 (UK). Trying (hard) to complete a novel, start another and wrap up a collection of short stories.