Excerpt from Oscar of Between, Part 17B

“During the six years of my architectural education the subject of comfort was mentioned only once.”

— Witold Rybczynski, Home: A Short History of an Idea

Denis and Oscar first “met” via staying in one another’s apartments in the spring of 2009. Oscar, desperate for a writing retreat but unable to afford one, had been asking everyone she knew in Vancouver if they knew anyone in Montreal interested in an apartment exchange. At the eleventh hour, Oscar ran into Allyson on The Drive. They’d not seen one another for a few years and Oscar suggested they go for lunch and catch up. In their conversation, Oscar asked the Montreal exchange question and, remarkably, Allyson thought her friend Denis might be interested. And, he was.

Upon arriving at Denis’ Oscar notes that, regardless of the dissimilar architecture (–space –) and eras in which their buildings were constructed (– time–) Denis and Oscar’s sensibilities (– relationship –) to creating home are similar. Oscar puzzles over which man is Denis in the photos throughout his apartment yet she feels immediately at home. Within days, Oscar writes two of her best pieces: the final essay for Breathing the Page, “Sustaining Yourself as a Writer,” and Part 12 of Oscar of Between.

Two years later, Oscar asked Denis if he would like to read Part 12 of Oscar of Between as it evoked a number of details about his apartment. Yes, he wanted to read it. She sent it. Several days later, Denis emails Oscar.

I have read your Montreal manuscript just once, with great interest. Yes, the brassiere lady … Rest assured: I never hang any underwear on the clothesline either …

Iris of eye in her teal pajamas, Oscar awakens early each morn in Denis’ white bedroom and white-sheeted bed. Gazes out tall window on her right. Watches how ivy on brick cups sunlight like an enchanted child’s hands, its leaves move ever so slightly in a moisture-infused breeze after last night’s storm. Oscar listens for the sound of the opening bars of Denis’ neighbors’ rising: pop of a balcony door opened; cupboard doors and drawers – flat & tableware jostled; clink-clink-clink of a spoon in cereal bowl; crescendo of kettle whistle then sharp chirp as it’s lifted off burner; murmur of first exchange of words; recorder’s lilt briefly played; staccato complaint of laundry line pulled after each item’s pegging.

Difference between vertically entering the day and horizontally entering
it – how Oscar cherishes it.

Arc of memory leaps to just over a year ago – the phone call – one of Oscar’s students had died. Counseling had been arranged, Oscar had told her student she’d go to the next immigration lawyer appointment with her, pleaded with her, “Don’t give up. Write about it – they can’t take that away from you – don’t give them that power.” But the vortex was unrelenting. For days after the phone call, Oscar feels it in her body – the how – before police confirm it. Her student had jumped. Jumped from her eight floor balcony. No turning back. 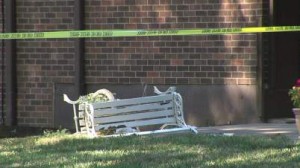 This is where words turn their back on you.

Those weeks before, her student kept saying, “There’s nothing anyone can do.”
“Nobody can do anything.”

Utterly alienated as an exile for twenty-five years in a European country, her brother executed in Iran, Canada was her only hope.

This is when denial of a visa translates into a death sentence.

Her student had been embraced as a writer but it wasn’t enough. It was nowhere near enough.

This is where we resort to a two-letter word: I can’t take it anymore. I didn’t see it coming. It will come back to haunt you. It’s over. 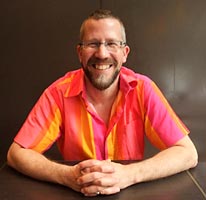 “Until the eighteenth century, the idea of having comfort at home was so unfamiliar that no word existed for the condition. Comfortable meant merely ‘capable of being consoled’.”
— Bill Bryson, At Home: A Short History of Private Life

Allyson had sent a message: one friend was looking for an apartment exchange in Montreal. At first I replied that I would keep my ears open and let her know if I heard of anything, but then I thought better of it and told myself: “Why don’t I go?” And this is how Oscar came to my place to write, and how I got to stay at Oscar’s in Vancouver. 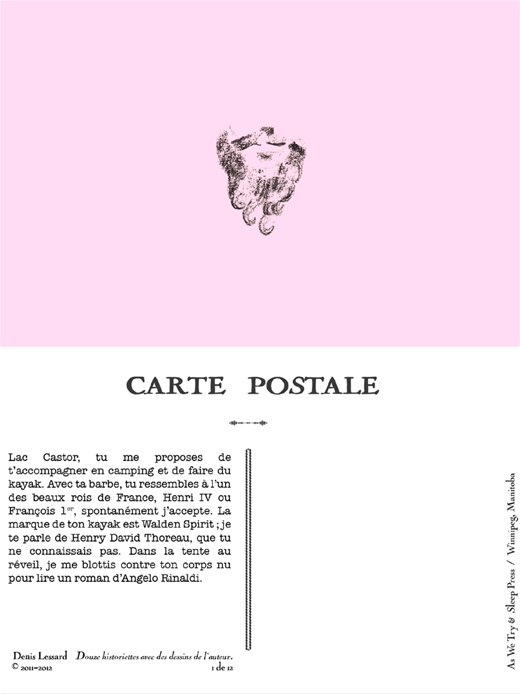 Denis Lessard. Historiettes, 2011-2012.
One postcard from a set of 12.
Drawing and text by Denis Lessard.
Design by Larry Glawson.
Published by As We Try & Sleep Press, Winnipeg.

“As writers …, we are endlessly having to set and reset parameters for protecting our concentrated writing time with our intimates and others around us, as well as with ourselves, and even with our writer-friends.”
— B. W.

How I met Steven

Just when I was planning to call Olivia at the tea store in Vancouver, I received an e-mail from her, announcing the arrival of new teas. I called the store and Olivia answered, but right away the voice was different, deeper. I addressed myself to Olivia but the voice replied: “In fact, this is not Olivia …” Jokingly, I said: “You must be the fake Olivia …” I introduced myself, still under the impression that I was speaking to a lady. I could feel a smile in the voice. I asked the person to please tell Olivia that I would drop by on Monday afternoon.
That Monday at the store, a very kind Asian man came up to me and introduced himself: “My name is Hoi-sin,” he said humourously, “just like the sauce. In fact I am Betsy’s brother’s partner, Steven, who will come and meet me here in a while.”
This is what had happened: when I first called Olivia, she saw the name Warland on the call display, and handed the phone right away to Hoi-sin, thinking it was Steven. Then Hoi-sin was smiling on the phone, believing that it was a certain Danny who was playing a trick on him by disguising his voice with a French accent.
And this is how I ended up having tea with Hoi-sin and Steven at Olivia’s, whose tea store had been highly recommended to me by Oscar.

Betsy writes a note in my guest book, telling me that she has finished writing Oscar of Between. Here. 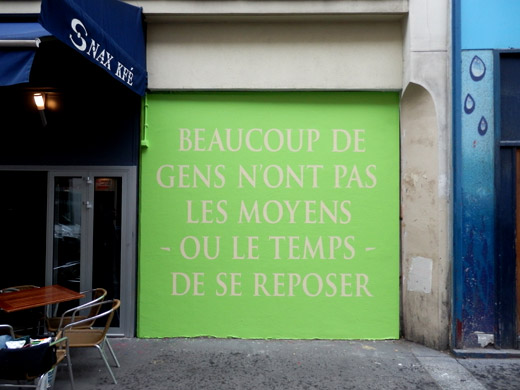 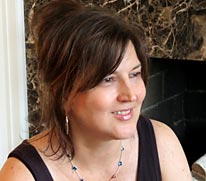 it is a rich river delta.
A play of the particulate.
A crucible.
Oscar’s Salon is a process that asks us to pay attention, to show humility in the face of ignorance, to burrow with our hearts, to fall into dark places, and to trust the energy of emergence.

Andrea Mozarowski is an educator and writer living in Toronto. The manuscript she is writing is a post-war story that probes, in the words of Professor Kate Brown, “the ragged, fraying edges and silences left behind by the people who were unlucky enough to be born in one of the most quietly violent territories of the 20th century.” Surviving revolution, terror, famine, and war, three generations of Ukrainians search, over the course of their lives, to believe in love again.

Betsy Warland, from whose mentorship Andrea has benefited enormously, describes Andrea as a kind of war correspondent piecing together fractured narratives of the living and the dead.

Picture Andrea sitting beside a pile of bones. Her ancestors’ bones. She is trying to get close to them for their heat—for life force, for old knowledge, for love.

Fire in the bones.

In the end or the beginning we cannot undo what has happened. We can only tell it.