Excerpt from Oscar of Between, Part 14B

Then there’s the gun. In its dusty, fake-alligator-hide case. She’s been in a quandary about it for years. How to get rid of a gun? There’s the practicality of the dilemma but also the emotional trigger it sets off.In the twelfth year of Oscar’s life her Aunt Lyla advised Oscar’s mother to send Oscar (perhaps a too solitary girl of the farm and woods) to the YWCA summer camp. This is when she first encountered the fierce jockeying for popularity among girls — girls from cities and large towns who had attended the camp before and who came with friends. Within the first hour she does something she’d never even thought of before: she changes her name. Does it instinctively. Desperately. Had to become someone else. Becomes “Rusty.” Since popularity wasn’t an option maybe a surprising name might help. The other girls respond with at least some faint curiosity.After breakfast the first morning each girl must select a set of daily activities. A novice in all, Rusty chooses canoeing, water skiing, target shooting. She soon excels at skiing. At the end of the week, her canoeing group sets out on a two-day wilderness trip. Rusty is stunned by how the other twelve-year-olds set their alarm clocks a half hour early to meticulously apply their makeup before breakfast. Someone also steals her hard-soled moccasins.

Target shooting (another foreign activity) goes better. At the awards dinner she receives the Deadeye Dotty Award for the highest scores for marksmanship.

That Christmas she had only one request: a .22 rifle. Her mother adamantly refused. “What would people think?” But on Christmas Eve, after all the presents were opened, her father said, “I think there’s one more for you, Betsy, back under the tree.” It was a long, narrow package. Could it possibly be? Oscar could barely contain her giddiness as she tore off the paper and pulled the gun out of the box. She glanced up: saw her father’s smile.

He had seen her. As she was.

Now, as Oscar frets about what to do with the gun, she tells Sophie the story of the two gifts. For her seventh birthday, Sophie’s only desire was for a Barbie doll. The very thought made her mom cringe, so Mary (a longtime friend) asked Oscar (who was Sophie’s godmother) to do the deed. After her own recoil, Oscar recalled her father and the rifle. Her turn to bite the bullet, she bought the Barbie. 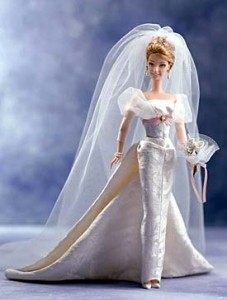 Sophie and Oscar decide to take a break after a few hours of sorting. Go back to Oscar’s for a bite.

She cannot postpone this decision any longer. There’s no one who wants it and her young son has fortunately shown no interest in guns. While Oscar makes their lunch, she asks Sophie to call a few gun stores to see if one might buy it.

Upon returning, they finish loading the car with objects Oscar’s moving back to her apartment. The gun is the final task.

Silently driving to the store, a peculiar kind of nervousness is circling around them. When they walk into the narrow shop their discomfort increases: it’s teaming with customers. Some are the type of men you would anticipate; many are not. The mood is one of contained excitement. The conversations between staff and customers, and customers with other customers, are intensely focused. Sophie and Oscar barely speak, each as uncomfortable and out of place as the other. A young man next to them effortlessly spends $800. Oscar wonders, “What am I doing here?” and fights the urge to leave. Goes through the reasons again: it’s worse to throw it away. Who might find it? Use if for what? Better to have it registered.

Odd how difficult it is to get rid of dangerous things.

The store buyer finally has time to wait on them. He takes the gun into the back room to inspect it and run a security check. Returns and offers Oscar $50. As he hands her the crisp red bill Oscar stalls inside herself with a small grief then recognizes that this story of two gifts suddenly makes sense.

Sophie is already eagerly heading for the door.

Sophie turns around as Oscar catches up and hands Sophie the crisp red $50. Sophie’s face flushes with surprise.

“Why are you giving it to me?”

“It’s yours. The rifle. The Barbie. This is how the story ends.”

Twenty years post-Barbie, Oscar is revising this for her February 2014 Oscar Salon. It’s then that she recalls another connection between rifle and Barbie. She does an online search to confirm it. It’s true. The engineer Mattel hired to “re-think the design of a German doll called Bild Lilli” had previously designed missiles. Oscar finds an image of a 1993 Barbie, then an image of her .22 rifle’s vintage. Rotates the .22’s image so that the barrel points down. 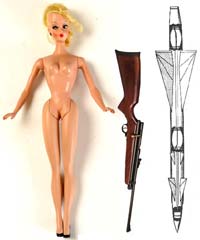 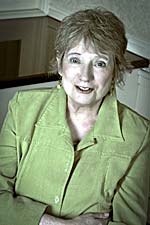 I had a gun once. It was a .22 something-or-other, the gift of the farmer, Pete Kereluk, who rented my land and didn’t like the idea of my staying alone. My property was on a secondary road and you could easily see my shack as you drove by, but this very visibility is what might have given some of the “boys” riding around in their pickup trucks some ideas, according to Pete. So he handed me the rifle in its already-opened cardboard box. It was surprisingly light, balanced tentatively on my hands, but then I saw it was made mainly of plastic, which, I admit, disappointed me. It felt like a toy (maybe it was for girls?) until I felt the whump of it recoil against my right shoulder as I took my very first shot, ever, from a firearm. I couldn’t believe I had done it and I examined with some wariness the small box of elegant bullets, packed in tight rows, that could kill a deer and most certainly a squirrel. Could a .22 kill a man?

Email from deerhunter Harvey Spak: “Could you kill a man with it? For sure. For years the preferred assassination weapon of the Mossad was a .22 long rifle pistol with a silencer. At close range it was most efficient, quiet and left no mess.”

Of course, I never intended to shoot anything except a tin can on a fence (a pastime I saw in Western movies) but Pete took his training responsibility seriously and insisted I practise first by shooting at the half-hinged door of the old barn across the little meadow from my shack. I thought this was a risible “target” — how could you miss it? As soon as Pete drove out of the yard, with a tip of the finger to the brim of his Co-op cap, I rummaged around in the shack for something that looked like a real target, something that had enough details or features on it so that I could measure how well I was doing from large to smaller target points. I don’t remember what the choices were but I do remember that I chose a large poster of the famous portrait of Karl Marx that many of us had up on our bedroom or study walls, along with Che Guevara and, in my case, Hanoi Jane (Fonda). It was rolled up in a corner. 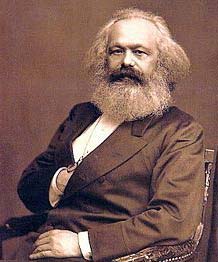 I nailed it up on the side of the barn and shot away. I meant no disrespect.

Email from deer hunter Harvey Spak: “Your rifle was .22 caliber semi-automatic meaning it fired every time you squeezed the trigger. It had a magazine that you loaded with perhaps 10 .22 cal long rifle cartridges. Once the mag was loaded, you inserted it into the receiver just ahead of the trigger guard till it snapped home. Then you cocked it, i.e., you drew back the bolt on the receiver just above the trigger guard and were ready to fire. When you were ready to shoot you clicked off the safety and fired.”

One day my friends, the poet from Wood Mountain, Saskatchewan, Andy Suknaski, and deer hunter Spak rolled up for a visit. While Andy tamped his pipe and gazed out the little window that looked south to the old barn, he saw Karl, and kind of yelped. Later he wrote a poem, “Marx’ Woman”: she hands suknatskyj/her rifle/’try that tin can/on the barn windowsill/gun’s ready/just flip it off saftyMYRNA: this spelling in the original/the red dot/should be showing’/PTZWWWAAAaaaaannnnnnng!/on the garden’s edge/the sunflowers stand/motionless/like a firing squad/behind her.

Andy Suknaski and I sometime in the early 80s

Karl marx/winces/frowning at the hopeless/marksmanship/of suknatskyjMYRNA: Suknaski's poem comes from the collection In the Name of Narid, published in 1981 by Porcupine's Quill Press in Erin ON p 48

I kept the gun under my bed with the loaded cartridge in the drawer of the little bedside table. How fast did I think I could load it? One day a friend originally from Montreal paid me a visit. I showed him the .22, with the same satisfaction I showed him the red Olivetti portable typewriter primed for work on the little desk. My friend was unimpressed. He was from the big city, and savvy. “If you’re going to have a gun around, be prepared for it to be grabbed from you and used on you.” I had never thought of that. I took my .22 into the city and handed it over to the police. After that, I slept with an axe under the bed.

Email from deer hunter Spak: “I question the self-defence advice given you by your Montreal dude. If an attacker could wrestle away your rifle and use it against you, he would have less trouble taking away the axe. You’d have first advantage and a longer reach with the rifle than with a 2 ft axe. And if he got the axe away Bozhe! Bozhe!” Lord! Lord!

I read Oscar because it’s brave and quietly fierce and always surprising; a conversation that I continue in my head long after I’ve finished reading.

Susan Young is a poet and fiction writer living in Vancouver. Her first two stories were published in The New Quarterly, “The Perfect Age,” (118) and “When Genghis Khan Was My Lover” (125), the latter a runner up for The Peter Hinchcliffe Fiction Contest.

Her poems have appeared in The New Quarterly, Room, Event, The Antigonish Review, CV2, Prairie Fire, Poetry Canada and the anthologies, Desperately Seeking Susans, Chasing Halley’s Comet, and Vintage 97/98. Her poetry manuscript, In the room that became a forest, received an Honourable Mention in the 2009 Alfred G. Bailey Poetry contest.