From Oscar of Between, Part 28 Excerpt

The Plateau. Instantaneous positioning. French-speaking (or not) seems to determine more of the what and the how of what transpires than gender.

Although it must also be said that prowess of gender marking and signaling remains skillfully refined in Montreal.

And, although Oscar is not routinely taken for a man here, she frequently is.

If you suppose that gender protocol and positioning in daily encounters between strangers is nearly obsolete, you are mistaken.

When: a stranger sincerely apologizes for bumping into Oscar;

a bank teller is unusually attentive and solicitous;

a woman next to Oscar on a plane asks a series of genuine questions about Oscar’s professional life;

a clutch of girls on the sidewalk moves aside when Oscar is approaching, or the bus driver has no qualms about letting her off at an undesignated stop;

a woman considering what to buy in a produce section suddenly moves aside with apology;

a boy’s arm mid-air with snowball halts to check Oscar’s eyes for possible threat as she walks by;

the extent of deferential treatment never ceases to astonish her.

The Internet is rampant with all sorts of camouflage and anonymous shaming, vicious GTFO and sexual and violent messages sent to female gamers.

Big Data collection corporations on average have 18,000 pieces of information culled from every aspect of our online activities to sell to other corporate marketing departments. Big Data’s cannibalizing of our habits and preferences is becoming the world’s most valuable and profitable resource.

Big Data refuses to disclose its information on us, to us. Harmful misinformation is almost impossible to correct.

For Big Data (echo of Big Daddy), anonymity on our computers, our handheld devices is a ruse.

A Woman in Berlin: Eight Weeks in the Conquered City by Anonymous. Yes, Anonymous was a woman. 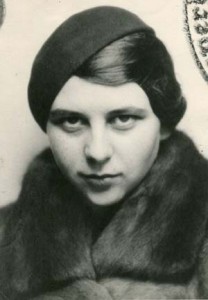 Among her observations is a detailed account of the Red Army’s rape of more than 100,000 women and girls in Berlin, to which the German men turned a blind eye.

When the book was first published in Germany in 1959, it was “met with hostility or silence,” dismissed as immoral. Disappeared.

The gender-specific necessity of camouflage.

In the book’s foreword the publisher, who eventually reprinted it in 2001, writes:

“By the seventies … photocopies of the text … began to circulate in Berlin among the radical students of 1968 and the burgeoning women’s movement.”

When he searched for the author during the mid-eighties, he discovered that the “author could not be traced, the original publisher had disappeared, and it was not clear who held the copyright …”

Eventually he tracked down the original publisher’s widow who knew the diarist. She interceded and spoke with the author who still did not want her identity to ever be revealed, nor did she want the book to be reprinted while she was still alive.

After her death in 2001, he reprinted the book. 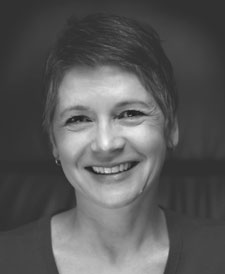 I knew about the scar, the blackened circle staining the desert at Almogordo — where the sand was fused and melted green by the bomb — reaching a temperature so hot there are no tools for measuring. 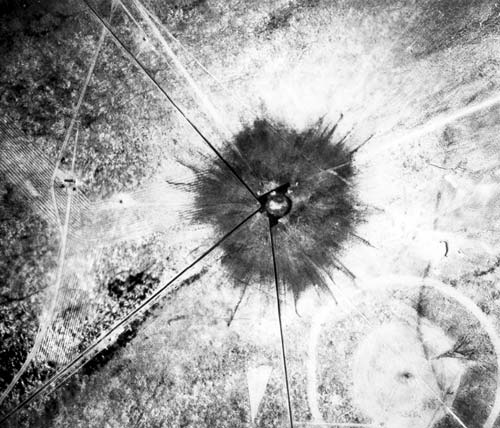 I do not pretend to understand how this was done. A compression of plutonium. Uranium — depleted. Fission. Fusion. Words that fill the cavern of the mouth and linger. The emission and absorption of neutrons — two for one! — an inspired thought, the story goes, that came to physicist, Leo Szilard, as he waited at a traffic light in London. I imagine this: he contemplates the mundane (green light — go!) and the universe cracks open. He sees the possibility of the chain reaction that releases the unknown energy. Do not artists experience the same thing? There! — the image, the feeling skulking in the shadows and can’t be known if you stare directly — but look away, let it pulse at the corner of the eye — don’t look at the eclipse! — and there it moves, shuffles, lumbers almost into view as if it wants to be discovered, its need to be found as palpable as a fingertip pressed into flesh. I’m here.

At Trinity, a ring of green glass was left behind by the blast. Slightly radioactive though not dangerously so. And a new name for the new mineral created in a crucible of air entered the lexicon. Trinitite. Dull word. No beauty there. There was black and red glass too — and mysterious small white pearls that fell out of the sky that day. The bounty of science — to make rain by melting the earth.

They bulldozed the area to clear away the evidence. Smooth and bury. Rake it like a Japanese garden. Into silent waves. Erosion, of course, could have achieved this alone — the green crater eased into oblivion by the force of the wind, over time — the erasure of history. Time is a faithful God with a singular purpose — to break nature down.
Now, I am become Death, the destroyer of worlds — Oppenheimer’s gasping thought.

Let me remember. How the dreams disturbed in ’45.

Two crows fly west in the dusk. The birds alight — two trees ablaze in reds and yellows. The poplars hang their catkins like paper ornaments. And then the wind. The sudden thief.

You know the kind of nightmare — the falling kind or chasing kind or the door after door kind and the heart thuds, and you can see but you don’t want to. You hold your breath while every leaf is torn away. Stripped trunk and branches. Charred thoughts. And blue follows. Nothing but blue, and a white moon and the exposed bone, and the air returning to the obliterated void of the nothingness. Hours or days pass. An era. Only poets can ascertain this passage of time. The blue isn’t comforting. It is the inside of a cloisonné vase that has been poured empty. And rain would be welcome.

In the morning, sleepless, I drive to the Black Place to calm my heart. And all I see is ash. Black dust sweeping into folds and fissures where the land buckles and collapses. The darkened earth is fired like a pot, cracked, web-fractured from the heat. I walk but it is not dirt under my feet but the gum of the earth. It will stick to me—boots and soul. 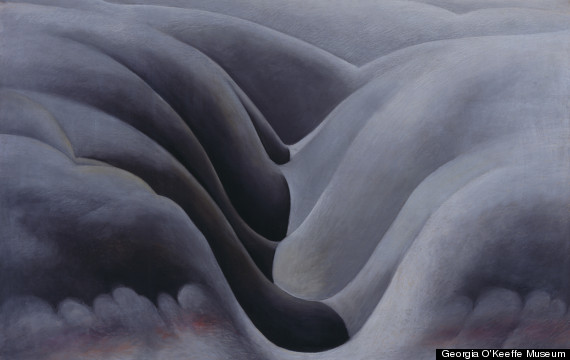 I reach for charcoal — my soft blackness. Today it belongs in my hand, more than the brushes — because today the dust enters me, absorbed into my gridlines until I am a map, a contour. I sketch. The paper yields like a wounded bird. I push harder, the wrist a fulcrum. Yet there are muscles in paper too and it pushes back. I drag my hand over the land — clefts, dips, rises, the collapse of form, the sinkholes of grey. And I wonder for its meaning and structure.

I thought I was painting hills.

But there were billows — a boil of grey vapor on the paper. And a questioning line of red.

And yet, there I am in the desert with light and darkness pounding into clouds, angel wings soft yet macabre, and it is not earth, and it is not erosion that has stamped this desiccation, and it is not a hill, and I put it down on the paper as I see it. And I did not think then of art as destruction. 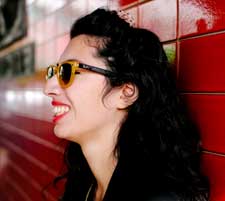 to ponder histories, language, connections and distance.
to find meaning in space.
to pause in the beauty of experience.

Leanne Dunic is a multi-disciplinary artist and a writer. Being of mixed race, much of her work possesses hybrid-identity themes. Leanne recently won the Alice Munro Short Story Prize. She hopes to spend half her time in British Columbia, and the other half in Asia, but this is not yet the case. Leanne is the singer/guitarist of the band Luck Commander.