Excerpt from Oscar of Between, Part 1A

(outside). Atmospheric twilight of Camouflage Exhibit (inside). Oscar, having quickly walked

“open wound of the ear.”

Oscar
: neither man,
nor marked with natural cover.

That leaves her with art.

First display case. Dumb-struck. For all her notable difference – this one had eluded

Oscar. This unidentified force. Shaping her life. Thought it had nothing to do – with

her. Until. This moment.

– sixty years to get here –

“At a slant.” Dickenson knew. Glimpses of a narrative’s ghosts. Most a writer can hope for.

Prior to London. It’s her cousin who tells her the story. Farm fields unfurled. Her cousin’s

Oscar. Left alone.
Strips of wallpaper piled up in her crib (pulling at what’s beneath).
Her aunt gets a glimpse.

Fifty-nine years later Oscar gets a glimpse too.

To foil: run over or cross (ground or scent) to confuse the hounds. Oscar. Never taught.
Not her instinct. But her mother adept at. 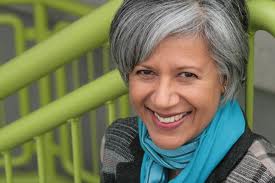 Listen, tree—how old are you

and-what-I-really-want-to-know-is—
do you carry for yourself, a secret name—
the way a river might—
bounty learnt year by year, province by province:
Newfoundland

on the banks of the mighty Fraser

set down and sing a Settler’s Song:

names flow inside the soft brush of grasses

—to get at them, toss and crush

Give this to me, tree,
and I will watch you

I see buds on each of your Shiva-arms.

They will come in hundreds, thousands, wrapped—

the way you work, bit by bit, covert,

An embrace of branches from your helix spine

a swerve and the tallest ones curve

each day
the space
bet-
ween
your bran-
ches, fills.
Quiet. Change drops in stealth:
buds push out from grooves, sprockets, the tuber-heads on your arms.
How sly you are,
and I, devotee.

No to interjections. Interject.
No to singing. Signs, instead.

Yes to the thing. Thing.
No to words. Words.
No to pleasure. Pleasure.