Betsy Warland Takes Oscar of Between to Toronto 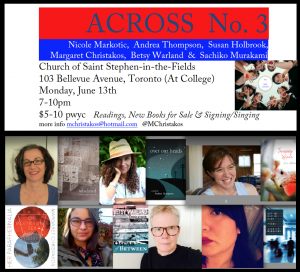 Betsy Warland in Toronto Reading from Oscar of Between

Toronto friends: You have two opportunities this month to hear Betsy Warland read from Oscar of Between, a critically acclaimed memoir that crosses boundaries of all kinds–genre and gender, to name but two–and examines the concept and state of being that Oscar calls “between-ness.”

June 13th: Betsy reads with ACROSS No. 3, a dynamic lineup of writers and musicians. This event takes place at St Stephen in-the-Fields Church, 103 Bellevue Ave., Toronto (at College Street). For more details, check out the Facebook invitation.

What the Critics Are Saying

Critics have been raving about Oscar of Between. Lambda Literary says: “Vibrant and pulsating with life, Oscar of Between, like Warland’s other works, demonstrates Warland’s multiple engagements with crucial—and contemporary—literary, political, and aesthetic questions.”

The Winnipeg Free Press describes the book thus: “Warland’s Oscar of Between is an astonishing book by a truly luminous writer. Intellectually and emotionally brave, there isn’t a word that doesn’t ring deeply, deeply true.”

So you won’t want to miss these two readings, Toronto! In the meantime, check out some of the reviews, as well as an interview with Betsy about how she conceived of and wrote this genre-crossing book.