From Oscar of Between, Part 20B

Summer, 2012. Oscar. In Edmonton. At the Precarious Theorizing Symposium at the University of Alberta: an idea/emotion-infused gathering to honour and continue the thinking of Dr. Sharon Rosenberg who died two years prior. Sharon had sought out Oscar as an editorial consultant for her increasingly unconventional scholarly writing not long before she was diagnosed. Two of Sharon’s central concerns were “traumatic ignorance” and “memorialization of violent deaths.”

Oscar, preparing for the conference, fails (once again) to turn down the volume before the CBC’s top story begins: “Seventy-two people have been shot while attending the new Batman movie – twelve are already confirmed dead. The shooter is an unidentified young man who wore combat gear.”

Oscar. Stopped. In. Her. Tracks.

A few days later, Oscar decides to conclude her keynote with a reading from Oscar of Between, Part 18.

No one stirs after she finishes.

It is utterly silent.

Oscar, still looking down, gathers herself. Sighs. Looks up at their faces.

A tender clapping falls on them all like much-needed rain.

The next day at the final presentations, two women scholars of German origin comment on their struggles with WWII.

One of the women reflects: “How could it be that amidst all of our theorizing what we weren’t doing … was … talking about our own transgenerational hauntings?”

The other woman says that the possibility, even assumption, of being implicated leaves her feeling frustrated and hopeless: “Where can you go with that?”

Oscar agrees that “implicated” and “complicit” have accuracy but that they also stall us in various forms of reactivity.

She searches for another word.

Then it surfaces:“Disassociation.This is what deeply concerns me – its deadly toll on us all.” 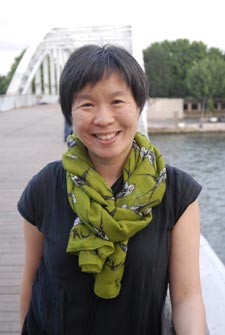 Fall, 2012. Haamyue. In her UBC classroom, teaching a fourth-year Canadian Literature class, entitled “Race, Memory, Citizenship.” This course, and its required nature, a consequence of so many layers of affirmative action. What we thought we were fighting for. In retrospect, it is a course on second-generation trauma narratives and the problem of postmemory.

“The second generation is the hinge generation in which received, transferred knowledge of events is being transmuted into history, or into myth. It is also the generation in which we can think about certain questions arising from the Shoah with a sense of living connection.” (Eva Hoffman via Marianne Hirsch)

I know about this already. I’ve been to the Museum of Anthropology.
The question is what would you rather?
When your generation is dead, racism will be over.
They already made us listen to a Native elder in high school.
Oh my goodness, there is a whole field of study about questions of race?
[Weeping] I never thought of myself as racist.
It’s a dirty topic.

At the back of the class, a young white man in a cowboy hat. Sullen eyes. Quiet. One day he’s waiting for her. Haamyue, terrified.

“Professor, I’m struggling with the class. I don’t understand what is expected of me.”
“Would you like to come to my office and talk?”
“I don’t understand what this book is about.”
“Well, it’s about a group of friends growing up in Toronto.”
“I’ve never lived in the city before.”
“Do you identify with any of the characters?”
“Not really, no.”
“Hm.”
“Maybe Oku. Kind of.”

Haamyue’s body is wanted. Not like that. To represent, on institutional committees. Haamyue’s speech– more often than not perceived as angry, regardless of her own feelings in the moment.

“we can’t stand the sigh
of you”
Double the consciousness, double the fun.
i c u looky loo
ur thots trans
parent as saran
She can explain their psychic processes to them before they even realize the spin they’re in.
Haamyue, a dizzy bond.
Walks backwards out the room, leaving broken mirrors in her wake.
[pause]
The exhaustion of infinite regress.
–3–
“Distinction is made between infinite regresses that are ‘vicious’
and those that are not.”
we theorize wide-open subjectivities
in the shampoo ad
a girl runs through a field of wildflowers long hair streaming behind
every fascist adores
herbal essence
our best legal selves shower daily
power picks a peck of pickled pepper  the womb men suited
for sight
glance
not you oh no
starbucks gets in your eyes
havin’ a whale of a swansong
haunted, ha. haint aint.
hunted, dismembered, remembered
common experience or standard procedure?
me mem mum mem mumble mut mut mutter moot suit
re mem hum man might? right. hum moo hum you hum us? oh earth rot
root rotor rudder round re rum re drum
ho hum
mem?
brrrrrrrrrrrrrrrrrrrrrrrr
chilly climate global warming implicated victim complicit extinct what if the system hates you but you’re still in the spin cycle? find another system. insert teeth. cog to alternate do be do be do. there’s no outside to the world. 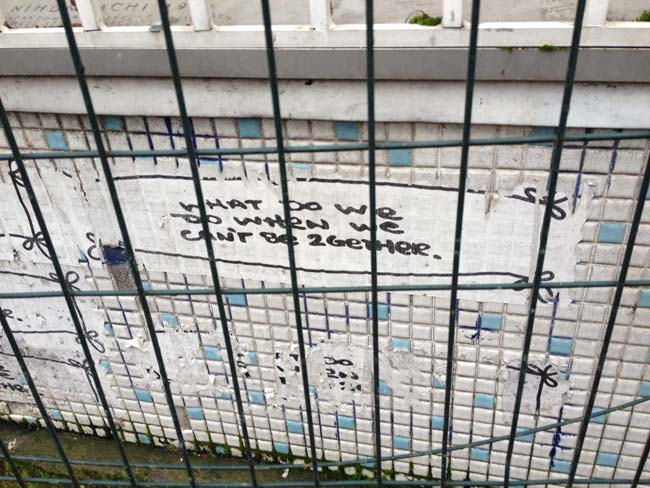 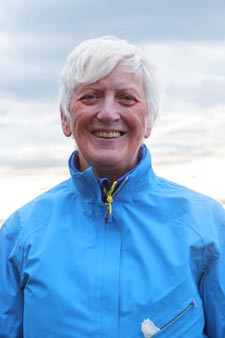 Reading Oscar provokes me to think and rethink writing and what it means to be a transgressive woman. In short, it stretches how I think and live.

Joan B Flood was born in Ireland and lived briefly in France and England before settling in Canada. Her writing has appeared in anthologies in Canada, the US and Australia. Her YA novel New Girl was published in October 2012. She recently finished a novel for adults, Left Unsaid a story of families and secrets that reverberate through two generations. She is at work on a new story, which she’s not ready to talk about yet.