Excerpt from Oscar of Between, Part 17C

A leaf parachutes down from maple.

With slight breeze, some leaves nod

while others wag back & forth

Pintxos. Cuisine espagnole with Nicole last night. Each pintxo an exquisite petit monde presented at a leisurely pace as our conversation stretched over three hours. Both compliment one another on “how very good you look.” Oscar, who enjoys testing gros & petit theories with Nicole now postulates how Montrealers’ lapsed Catholicism infuses their love of quotidian ritual and sensibilities.

Oscar cites the dominance of three-story walk-up apartments on the Plateau – how their architecture might reference the Trinity.

Then laughter as she shakes her head with recognition. 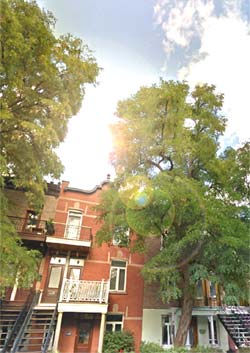 Oscar, attempting to take a day off succeeds until after lunch when she finds herself negotiating with herself. “I’ll do it for only one hour.” Starts keying in the opening pieces of this section.

Time, however, in all its articulated and unarticulated aspects, is a different entity for writers. Whenever we attempt to relate to it in a normal fashion we inevitably fail.

That evening the neighbourhood eerily quiet except for Mont-Royal where people perform necessary tasks as if in a lower body water exercise class while others seek refuge in every air-conditioned café, bar or store.

On rue Boyer no one in sight.
Balconies and backyards empty.
Sidewalks still.
All move as little as possible.

With every exertion sticky-hot sweat floods skin and clothes. To avoid increase in body heat – even lights not turned on as darkness envelops. Oscar flees to her bed, naked. Fan posed overhead on high. Imagines others doing the same.

A few hours into tossing & turning it happens without prelude: muscular, pounding rain smothers heat then

Shredded into layers and layers of small scudding fragments are yesterday’s bearing-down cumulus clouds. At the base of each fragment remain heavy graphite smudges yet each cloud’s whimsical top and borders glow in the purest white Oscar has ever seen.

Across softest of blues they move quickly as sixteenth notes.

In an article in July 17, 2011 New York Times, Alex Prud’homme challenges the term drought arguing that, in many parts of the world it is aridification.

“In the South, 14 states are now baking in blast-furnace conditions …
[and] wildfires.” Expanding aridification our most life-threatening phenomenon.

By 2025, the United Nations expects “global demand for water to increase by two-thirds.”

How little we know water.

How deeply water knows us.

Detailed records of past climate and hydrology in every aquifer. 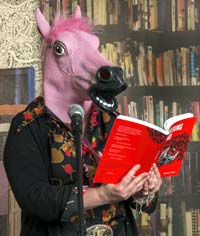 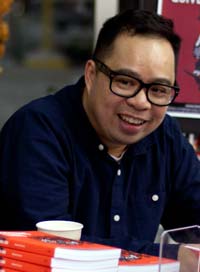 EACH AND EVERY BULLET

Standing on the edge of the horizon
a young girl takes each and every bullet into her heart
catching the odd stray with her tiny teeth.Not as dark as ripened cherry
Darker than crisp red apple
Richer than throat of red gladiolus
More vibrant than blazing sunset
The colour of fresh blood

If you asked the girl she would say her red dress wasn’t always this way.

In front of her is the town, ablaze with gunfire
behind her 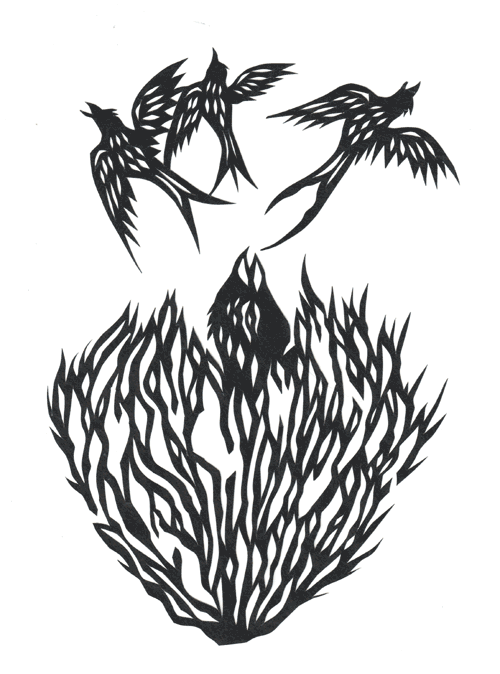 There is so much riding her, her body hardened by the jangle of spurs, the bodies dead, blood dried on her cheek, absence of something she doesn’t understand.

She wants the killing to stop.

She wants sunset and flower to mean something again.
Wants to wear a red dress. The trail of tears to end.
For good.

Pulling out large pieces of paper—Violet sets oil and charcoal to page. Quick and fast, lines hard and thick. She draws wounds, one after another, mining of the sacred hills, damming of water, forced exile, loss of children, disappeared women.

She draws the cowboy’s return to the small town, a haunted past. This her wound too, place of continual return.

Riding the land that never belonged to him. Tight inside his chest the
incessant sound of rifle, handgun, six shooter.

She draws each blast.

He wasn’t always alone. He might have ridden with a brother, or best friend, or a gang of lawless men. Until they were all shot. Dead.

She yearns for beautiful. Is weary of her studio’s open space incessantly filling with history, death, gunfights.

—shattering cry of the gun—

This death landscape of loss she calls home, seeps in and out of her as she draws another wound.

She watches it settling across the page.

Its shadow intrigues her.

She stands up to stretch her legs. Walks around the studio, aimless. Turns toward the white wall. Her shadow falling in front of her, now she’s up against the wall. 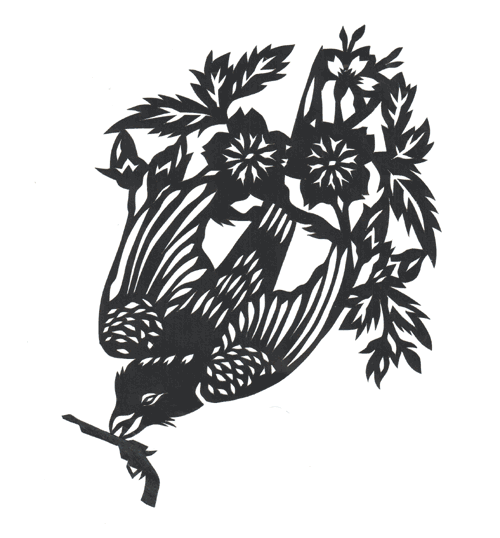 Just the dull thud of the hardened earth beneath her boots, Violet walks down the main street of the abandoned Western town. While the town is deserted, the buildings are remarkably well preserved. The feeling of this place also remains intact.

Everything was carefully constructed. In her mind she makes a list of the materials that were used. Wood, nails, glass, clay and shale. Each new building unquestioned, expansion assumed. No thought given to the first peoples of this place, to the land, or to the next generation and those who would also follow them.

There is no sign of green here, no sign of life. Uranium mining? Is that why the people have left? Was there another rush to the next thing, the next town? Did a few men gain wealth and move on while the others were left to scratch the dirt of nothing?

Violet walks around the old buildings. Stark structures built from felled trees and frontier dreams. She climbs up onto an old wooden box and looks into the Wild Horse Theatre. She can see the insides of the entire town here.

Most astonishing to her is that there are guns everywhere. Everywhere. Behind each door, over the bar, standing in corners, under the beds, in drawers, or sitting out in the open. Ammunition in closets and cupboards, in stores for sale.

She holds each gun properly as if she was going to fire it. Speaks the names of its parts —chamber, bolt, stock, firing pin, barrel— as if performance and language had the power to empty the gun of all deadly actions.

She sorts the handguns, into revolvers and pistols. Then the long guns into grenade launchers (single shot, multi-shot and automatic), rifles, shotguns and submachine guns. Separates the rifles. Bolt action, pump action, lever action, semi-automatic action, break (hinge) action. Then the shotguns with their smooth bore and front sights. Notices the weight of the submachine guns. Once the firearms are sorted, she constructs perfectly heaped piles of each type of gun on the wooden walkways on both sides of the dirt street.

Stepping into the middle of the road she digs the heel of her boot into the dirt, running it all the way down main street. Her calf and thigh ache with the exertion of digging the line in this way. She opens containers of black powder and trails the mixture of charcoal, sulfur and potassium nitrate into the rut of the line she has created, branching the powder out to the front of each building along the street.

Here on this line of gunpowder, she places a series of guns, increasing in gun power. She places an AK-47 and an AR-15 near the end.

Violet walks into the desert, into the pulsing sun, tired and thirsty. Returns in an M4 Sherman tank, parking it in front of the bank.

She lights the line. 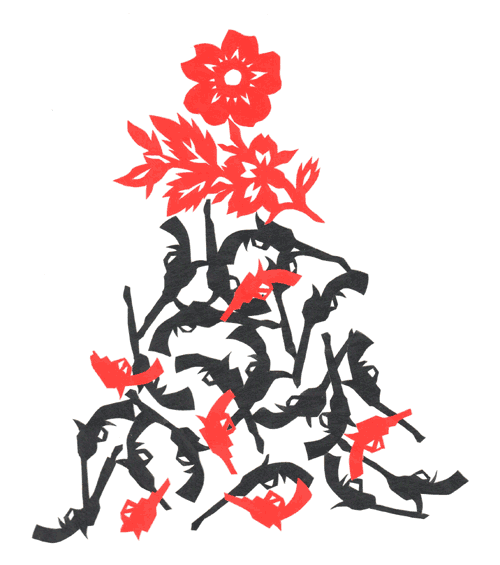 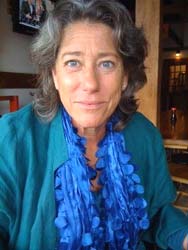 it moves me into Liminal realms. All of the writings I have read there, surprise , challenge &, make me do the hard work of really listening. it is a feast for the interior dwelling of life as it’s lived on the bottom floor of the real world of < in between>, and otherness.

For years now I have had a lifestyle that takes me between places. A studio, an apt., an office, a place on the land. As I weave and watch what I get up to in these various places, with their various communities that seem come with the spaces, the using, the Being in the place/space, I have an inner witnessing of mySelf, spiralling my energies, my thoughts, into the form of the space that holds me. Now I am seeing how I’ve dug the environments into a place which is set up continually to undo, or create anew, the original impulse to be there. To stay continually engaged with Process, is what I guess I am attempting to speak to here. At this moment, I am spiralling down, into Loss, into big Fires on the land, watching objects, plant matter, transform and disappear into ash. which then gets put into compost. When I’m in my studio, I find myself often working 3-5 visual pieces at once, or are they working me? Once in awhile a shock of resonance occurs.

It seems to me, we are an extension of our own environments, and they constantly reflect and encourage us to be free
or flow more into our predicament of embracing change.