Excerpt from Oscar of Between, Part 1C

Began, actually, a few months prior. Former student’s newborn curled into her shoulder. Inquired about its name.
“Oscar.”

Upon hearing
: surge of delight.

Albee’s Oscar. Stranger elegant in his difference. Upon sight of. Introduced each time a startled Midwest character comes on stage. By Elizabeth — Oscar’s unconventional companion — who appears to be utterly conventional, announcing (with Maggie Smith’s wicked aplomb):

“This is Oscar.
Oscar is Black.”

The aim?
Of camouflage?

To “see without being seen.”

Post bilateral mastectomy, others’ expectations. For prostheses. That Oscar.
— pros(e)thesis—

Absurdity of
: bra-bind if you have them,
camouflage if you don’t. 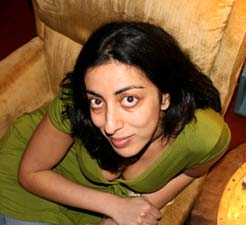 Excerpt from the story ‘Sign of Harmony,’ from her book of short stories, The Best Place on Earth
published by HarperCollins, Spring 2013

The New Delhi night is heavy with moisture, burnt-garbage smoke and car exhaust. Traffic is congested yet moving: rickshaws, bicycles and cars; brightly painted Tata trucks, adorned with shiny tassels like decorated temple elephants; entire families on the backs of motorbikes, the women sitting sideways, holding on to the free end of their saris. Passengers hop off buses while others hop on, the bus never quite reaching a full stop; some hang onto the bars from the outside as the bus drives off. Cows saunter in the middle of the roads. Ian watches the chaos with huge eyes, forgetting to blink. Then he leans his head against the headrest and closes his eyes, his eyelids fluttering. She understands how he feels. There was no reason to assume it would be different for Ian simply because he is Indian. He grew up in London, after all.
Maya had been fresh out of the army when she first arrived from Tel Aviv. She had started planning her trip in the last few months of her service. All her friends talked about going to India, it was the thing to do after the army, but she was the first one to make enough money to do it, working six days a week, twelve-hour shifts as a waitress on Mango Beach. She went about planning her itinerary as she had her army office work: circled places on the map, placed sticky notes in her travel guide.
Two weeks into her trip, her backpack was stolen on a train to Varanasi: her passport, her traveller’s cheques, her address book, her clothes, her travel guide. Gone. She had nothing but the clothes on her back. It was as if someone had erased her. Not that anyone was looking for her. Her father had refused to talk to her since she had joined the army—no place for good Orthodox girls—and her mother had never been strong enough to fight him.
While she was stranded in New Delhi, sorting out the passport and traveller’s cheques, sleeping in random travellers’ rooms, she met Vijay, who ran a travel agency from a small glass cubicle in the Krishna Guest House. He and his wife, Amrita, took her in, letting her sleep in the back room, leaving homemade food in stacked tin containers by her mattress. Maya, in return, babysat their daughter, manned Vijay’s office while he was out for lunch, arranged his files in a system she had learned in the army. Amrita gave her one of her shalwar kameez to wear, stamped a bindi to the middle of her forehead, and when Maya looked in her small hand mirror, moving it over her body to try and construct a full image, she was stunned by her reflection. Her small frame, her dark skin, her straight black hair. “Like Indian girl,” Amrita gasped, wobbling her head from side to side, in that gesture Maya later adopted, somewhere between yes and no. Even her name was Hindi, Vijay said. In Hindu philosophy, Maya was the illusion we veiled our true selves with. Maya thought back to who she was before India, at the Orthodox girls-only high school her father transferred her to after he’d found God, then in the army, where she’d slept alone in an empty dorm room while the other girls went home for the weekends.
Now, when she walked the streets of New Delhi, the city made space for her, letting her in. She had never expected to experience a spiritual revelation in India, had thought it a cliché, yet here she felt she was unveiling her true self, stripping off the illusion. “Maybe you were Indian in past life,” Vijay offered, and she smiled at that, pleased.