Excerpt from Oscar of Between, Part 4

The difference between: The First Time; The Last Time.
And between? “Time will tell.”

Virginia journaling about her nascent sense of writing Mrs Dalloway, how the “life of a woman” …might be told with almost “one incident – say the fall of a flower … my theory being that the actual event practically does not exist – nor time either.”

Stein writing narratives outside of time.

Time as the DNA of all interacting elements – apparent & not – at any given time?

Oscar back in London 11 months later. How one picks up where one left off as if. Almost as though there had been no gap in. Time. Almost as though it had been a few days since she saw Shaun. Saradha. Though much has transpired much now becomes unstuck from linear time. Bits of much surfacing unpredictably here & there in response to this here, here. And now. A kind of series of convergences and reconfiguring that makes Oscar giddy: narrative briefly on the loose.

Oscar having just dropped her beret amidst rushing feet while standing in vain effort “out of the way” searching for notebook in which she wrote down which platform to meet Shaun on but one does not stop in London, nor stand still, one moves, quickly, sits only rarely when one can snag a seat. Since her arrival two days ago Oscar clumsy not so much jet lag as different bodies in different space each place having its own kind of fluency. Vancouver stride all angle & awkward here amidst Londoners’ rushing sidestep. Then her name is called out: it’s Shaun. And Thomas. Hugs. Writers’ wharfing. Then off to fetch food for the train at Marks and Sparks outlet; then Saradha at Arrivals & Departures Board. Hugs. A force field gathering among them. Shaun’s name called out – it’s Pascal on his way to our retreat: introductions. Then Saradha notices “On Time” suddenly changes to “Cancelled.” Consternation. “What?” Speculations. Then the announcement: “We apologize for any inconvenience … due to a fatality on the tracks … all trains arriving and departing Paddington Station are cancelled for two to three hours.” The five of us casting about; considering options while Shaun is on his mobile notifying retreat staff, students on way to meet us in Exeter, taxi booked to drive us from Exeter to Totliegh Barton. Londoners familiar with transit closures, breakdown, cancellations. We decide: tube to Waterloo Station for train to Reading; transfer there. Just make it. In time. Stops at every; after first two stops Shaun gets off train feeling ill – somehow will find a taxi to take him to Reading. Underlying sensation of mass fleeing. At Reading: no Shaun. Platforms rapidly filling up; no train to Exeter on Arrivals & Departure’s Board. Then announcement: “We apologize for any inconvenience caused in your trip but due to a fatality …” no, not the same but another – this time on the line between Leeds and London. Thin tissue of civility damning mounting panic. Odd intimacy between these two suicides set in motion with us hundreds of thousands distressed commuters stopped in our tracks. These two we will never know any detail about other than the impact of their despair. Thomas comments they can determine difference between jump & push: those pushed arc further over the track; those that jump land square in the middle of. Saradha saying “February is suicide month,” Shaun arrives! I find a spot for him to sit and give him Reiki: “Is it helping?” “Yeh, it’s comforting.” The announcement “apologize for any inconvenience … due to a fatality …” repeats every few minutes intensifying anxiety. Then Saradha sees a train to Exeter has just been posted; we scramble to the platform. It immediately fills to brim. Shaun & I, finding a spot standing in front of luggage shelves, constantly subjected to a stream of people squeezing by our backsides as they board and exit, us gradually noting how people select different parts of their bodies to rub against ours as they pass. Others are crammed into the exiting & entering end of our train car. A camaraderie soon erupting among the clutch jammed in there who make light of. Hilarity crescendos in the face of near chaos. Antidote to collective panic. Skill developed in & between air raids generationally passed down. Oscar buoyed by this resiliency yet aching for the two dead; sobered too by our rampant reliance on efficiency – how it makes us so helpless – how a few moments brings us to near brink of collective collapse. 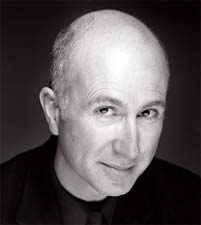 Afghanistan: Requiem for a Generation

Listen to the CBC broadcast at Concerts On Demand.
(Tracks are on the right and one can start at the beginning or jump to any movement.)

See also Suzanne Steele’s, a Listener’s Guide to Afghanistan: Requiem for a Generation. 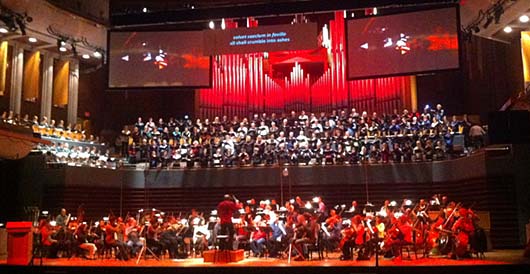 Afghanistan: Requiem for a Generation brought me together with poet SMS Steele. Suzanne, as Canada’s first War Poet, had spent several months in Afghanistan, witnessing and writing about her experiences with the 1st Battalion Princess Patricia’s Canadian Light Infantry.

Normally I hear all the sounds in my head when composing, figure out what is making them, and write it all down at once. But for the Requiem, I had to adapt. The singers would need their music weeks in advance of the orchestral players. I had to imagine the orchestral music, make it fit onto a piano for the singers to rehearse with, then expand the piano music back to orchestra.

click on image to view an excerpt from the score.

Though with an instrumental piece I start from scratch, one advantage in setting text is that some of the musical decisions are already made by the words. The sounds, the colours, the textures, the dramatic structure: all flow from the words. Of course, the implication is that in the creation process, the words come first. Yet not every great poem makes for great music. So it was a great gift to be able to collaborate with a living poet from the beginning of the project.

Suzanne was deeply and passionately connected to these stories. The traditional Latin Catholic Requiem Mass provided the scaffold, upon which Suzanne laid a post-religious journey through the stages of grief. It fell to me to say dispassionate things like “this is too short”, “this is perfect”, “this needs to be tenor not soprano”, and “the children’s choir will not sing in eight of the nine movements”.

Waiting for Suzanne’s text to be completed meant the composition period would be very short. There would be no time to later rewrite words that would also, then, require rewriting music. By helping to shape the text, I was already inspired musically by Suzanne’s words, and I could consult her regarding any specific sounds she imagined. So, when I finally sat down with pencil and staff paper, I already knew the emotional intent, subtext, style and structure of the work.

Traditionally in Latin Requiem settings, the long Dies Irae (Day of Wrath) text ushers in “war music”. Our Dies Irae is certainly war music, but because we use very little of the Latin text, it’s short and tense. A soldier has been critically injured by an Improvised Explosive Device and is being airlifted to emergency care. After a build-up in the orchestra that starts in slow motion and gradually speeds up to real time, all the singers enter. The text is comprised of words that the injured soldier would hear in the helicopter: “T triple-C”, “9-line”, “tourniquet”, “breathe!”. The fragmented text allowed me to build a multi-layered texture of overlapping sounds. The music is fast, rhythmic, urgent yet focused and deliberate in that way emergency personnel must have. Suzanne’s idea was to bury “S.O.S.” in Morse code in the music and it’s there first in the clarinets. As the music progresses and the urgency rises, the S.O.S. motif-as-heart-monitor rises in pitch, one step at a time, until the climactic moment when it becomes one long, flat-lined tone.

The November 10, 2012 world premiere proved to be an unforgettable evening. Roberto Minczuk led 270 musicians on stage: the Calgary Philharmonic Orchestra and Chorus, the Cantaré Children’s Choir, and a cast of four outstanding soloists performed Afghanistan: Requiem for a Generation to a packed house.

What an intense creation period: exhausting, elating and worth it.