Excerpt from Oscar of Between, Part 3

Although others’ descriptions for her loneness change over the years – tomboy, headstrong, stubborn, independent, odd, rebellious, arrogant, different, unrealistic – they all signal the same condition: one who does not play enough by the rules.

Categories being embodiment.
Of rules.
Being self-regulating
: automatic surveillance system.

Oscar looks the word up in her dictionary.

Category: “Any of the basic classifications into which all knowledge can be placed.”
An impossible — even perilous — notion.

The impulse of category more “not” than “is.”

Then there. In the etymology: “Greek kategoria, from kategorien, to accuse: kata – against + agorein, to speak publicly, from agora, assembly.”

… to accuse, speak publicly against from assembly …

: the suffering caused by all this against and accusing.

In her sixtieth year a new one surfaces in her mind. Illusive yet ubiquitous. As light on water

And Oscar is at ease.

– other persons of between – 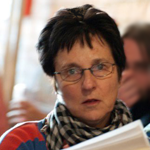 I first met Beta at the Queen Mother Café. And Queen Mother, as you can see from the language itself, is woman doubled, or, depending on the sign between terms, is woman squared. As those of us with mothers have experienced, the Mother is the Queen, but equally significant, the Queen is the Mother of us all. The thing is, both Queen and Mother are concerned with commands, with giving and taking orders — more precisely, with obeying, with being on time, with being on. While Beta was double female, in other words intrinsically lesbian, she was a post-community version, never on time, resistant to suggestion and prone to error. And I have to admit, I was just as bad. I suppose we never really had a chance; but we never really had a choice either. It was a large-scale, double Beta and Dark Matter experiment on the physical potential of GENIUS, or in any case concatenation, or rather as it turns out — incarceration. Together we explored the twenty most common grammatical errors. First lay and lie, then envy and jealousy. We got lost with who and whom, which and that, fewer and less, may and might, since and because. We indulged in affect and effect, irony and coincidence, whether and if, bring and take. We were deep into Queen Mum territory. Of course it was completely disastrous. Love doesn’t conquer all, at all; it may be that trust and respect have a better chance. We tripped each other up, then couldn’t find ourselves. What followed was farther and further, disinterested and uninterested and finally different than and different from, alongside moot, nor and nauseous, ending up with continual and continuous and extremely anxious. All freighted with major impact! I’m wondering now why we couldn’t determine better positioning in amongst all that dark matter and dark energy. We thought of ourselves as the most refined of instruments, even though when I think about it, weren’t we both still in development? I ended up feeling like an anti-neutrino produced in Beta decay. But it turns out I had other things to do in the world. Hot in cold dark matter, I projected my project forward. I could see Beta in the distance as a distinct number describing the correlated volatility of an asset in relation to the volatility of the benchmark that said asset compares to. In the end I paid for our coffee, left an overly generous tip and I boogied out of there — forever. We parted at this benchmark moment but ever since I’ve been waiting for the future to open up and turn around me. In some ways it’s all a matter of luck, isn’t it? I’ve heard Beta still appears in a variety of unrelated identities, but I can’t afford to see her. Yet. Maybe never.