Excerpt from Oscar of Between, Part 2

Oscar. Divesting.
Odds of survival. Her body insisting upon.
Oscar: disengaging from societal preoccupation with.
Over which the bra still reigns.
Deftness of hand unlocking.
Insatiable greed for
: the spilling out.
Hands on.
Mouth acquiring.
Breasts enlisted.
The meaning of “Mine.”
Who has the upper hand?

Oscar, initially subtitled “A Story of Failures.”
Several writer-friends recoiled, said “No one will want to read it with a title like that.”
The longer she lives, the more interested Oscar becomes in failure — what we consider it to be.
How so often it’s the unnamed force that shapes story.

Cubism’s dramatic escape from representational art.
Its quiet “borrowing” from African art.
First World War. The story tyrannizes us until it is understood.
Desperate realities made present in one painting; one sculpture. Mono-vision made askew with different points of view.
Splitting on a scale never previously encountered. First World War. Story tyrannizes until it is understood.
Splitting of Adam’s chest/rib into Eve. Splitting of atom/in the wings.
1907 = Cubism’s first painting
: Les Demoiselles d’Avignon
/Picasso’s angles on five female nudes/
(veneer of Venus stripped away).
Disruptive Pattern on British warships
: 1914. A line crossed.
World War One
: first large-scale encounter with The Other.
Cubism — first encounter with the other within,
and Other shockingly close at hand. 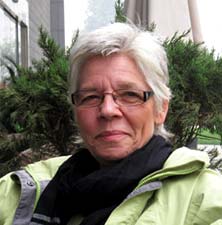 Excerpt from the first chapter of Digging to China: The Search for Wong Dong Wong (1895-1970)

November 1911
The official, face half obscured in a bushy, red beard, peers at the short, slight young man in front of him and sees a boy. With a scratchy pen he makes notes on a sheet of paper starting with the young man’s name and birthplace. These Won Cumyow, the Chinese interpreter standing quietly beside him, pronounces slowly in English. “Wong Jong Wong,” says Cumyow. ” San Jay, Sunna.” The nib squirts ink across the fresh paper and the Beard curses as he reaches for the blotter.
“Height?” he barks. “Four foot nine” comes the answer.
“Distinguishing features?” Cumyow follows the routine.
“Pits on forehead, and right eyebrow.” “Occupation?” Cumyow speaks again to the young man, the thirty-fourth Chinese passenger he’s interviewed so far. The answers are monosyllabic, as always. Accompanied by that curious look of determination and terror he’s come to recognize. “Labourer,” he says.
“Age?” “Sixteen.” The Beard looks up.
“Not possible,” he exclaims and points to the back of the young man’s head, nodding to the assistant with the measuring stick who approaches the youth, picks up his pigtail and places it along the wooden scale. “Thirteen inches,” he reads out.
“Well, that would make him about eleven, wouldn’t it?” asks the Beard, writing in the figure on the form without waiting for an answer. Cumyow says nothing.
“What did he say for occupation?”
“Would have to be a student.”

It is the interview with immigration that everyone dreads. He’s heard about the cheat sheets that paper sons memorize to fool the authorities. But you cannot predict what the authorities will ask, or what they will believe. Even legitimate sons make mistakes, are refused and turned back. What are the odds they’ll let him stay? The man called Cumyow continues his questioning: Where was his last domicile? “Hong Kong.” Where does his uncle reside? “Vancouver.” What does he do? Wong repeats the address and recites the story of Wong Wanshen opening a restaurant on Victoria Drive with two friends. He listens to Cumyow’s abbreviated translation. Then, suddenly the Beard is handing him a piece of paper.
Unsure what it means, he glances at Cumyow who explains this is his immigration certificate, warning him not to lose it. Cumyow is an elegant middle-aged man, who seems at ease with the Beard and with English, as if he’d been born here. Yet, he speaks Taishanese. Wong listens as Cumyow reassures him that he has been reclassified as a student so he will be allowed to stay. “You are a student, no? Well, make a point of becoming one. My advice to you is to learn to read, and learn English.”