From Oscar of Between, Part 18B

As with most old cities, the headstones are cheek-to-jowl.

Limbed, tall deciduous trees canopy black, polished marble headstones with empty drill holes (like reverse braille) where brass lettering once was. Re. move all. Oscar having read that morning that the thoroughness of the Nazis included chiseling off names of German Jewish soldiers on historical military monuments.

Here & there, vandalized headstones are a-tumble. Ivy covers headstones and ground in various areas of the cemetery and creates an eerie impression of figures sitting up in bed under green blankets. Many plain stone markers so worn away by “ravages of time” inscription eroded away.

No survivors are left to tend these graves. 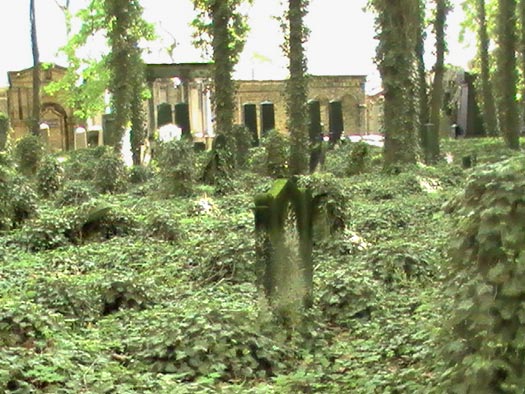 As they walk toward the main gate to leave, Ingrid and Oscar notice an agitated exchange between caretaker and a man while his two women companions look on. Nearing their clutch, Ingrid understands enough German to realize he’s refusing to wear a kippah. Refusing, also, to leave. Insult; assault. Continues.

The yellow beak – diamond-shaped outlined on black asphalt – a starling’s. Its terror jarringly similar to its “feed me, feed me!” upon parents’ arrival.

It was unbearable to look at. 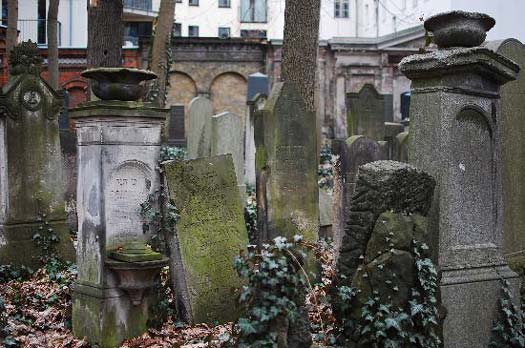 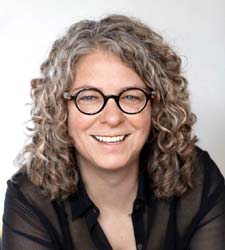 ‘Have you any Indigns round where you are?’

‘We have hardly any foreigners at all.’

Janey and Falk (and J.S. Woodsworth) Onboard

An immigrant ship mid-ocean – what a field for study!
Our novelists could collect ‘material’ for more books than
they’ll ever write of the turk’s-cap lily, poor corn-salad, the green
with the white in it. You’re been at that crust, I see. We could not
talk to many, for it was a strife of unpronounceable tongues, except
for the children’s querulous cries whicu .e in the one language
the world over. Come across you, I can’t, me. I’m got no boat. Here
lay two darlc-eye’ vomen of magnificent physique, their full breasts
heedlessly exposed, crashing down on the deck in a shower
of broken glass and oyf zayn shprakh:i Further on were decrepit
old crones from Asia Minor porcelain hurled back up in der haykh
un on- 0, Yezus Kokhan, their deeply-lined, repulsively ugly faces
and skinny claws causing you to associate them with harpies. Poor
souls! With only a limited dole of water, their dirt i:. not so much
their fault as their misfortune to learn them to shoo.

The children rolling in the litter of the decks – what a filthy lot!
A wild, moaning wind hot zikh tse-yogt ibber Froyen a number
o( young English girls too, whose fresh coiplexions lookid like
nothing so much as a mixture of knockabout coat, ill coffee and
milk, you. As the Padre poured the oil of wine and sympathy mto
their bruised hearts, I fed them oranges and apples khvallyehs
shloggen everything smashed for I have a well-defined idea that
women are not all soul for they have no eyes, alas; they have a way
of hungering after b.ead, even be-fore they hunger after righteousness
against the wet floor, that’s you, your louse, zikh geklapt mit.

And so they pass that first Shabbos of exile, (sailors) mit
farkhmurete peynimer Loyfen. Here a withered old Russian
woman in her outlandish dress with her old-fashioned little
grandchild, a diminutive copy of herself. There a young Syrian
pedlar; yonder a bent-shouldered Jew, half-image, half-veil,
and the men not far away in another comer, singing their own
sad prayers. Tossed on the stormy seas, women huddle together
clambering ibber di hoykhe, geflokhtene shtrick-guarding their
candles, so they shouldn’t accidentally layters. The interpreter, I love
listenin er, told us most had money from the look in their eyes to kipits
around, but it is hardly credible these off-scourings of the old world
own much else than you could tell something wicked was about to
happen, their poor rags the prima facie evidence not far to go, like.

We were glad to escape the pungent stenches and once more
breathe freely on deck, while the sea continued to dos gebrum fun
di rage and storm. The deck is the place alike for lovers and
suicides. Jewish women drag themselves on sea-sick feet to the
undzer shtetl. Our artist friend will find something more than
forms and colors – all of a sudden a huge Pole crawled on his knees
before an old Jew and began confessing the lights and shadows,
the gladness and tragedy of life: ‘Forgive me Jew! Everyone
was killing and robbing Jews… I also killed and robbed!’

Gendres are separated by the whole length of the boat, but
mingle freely on deck. If I dust them, yes. Toward evening,
they settle down into couples and fuck with u vrazen boldness
and brutal indecorum that almost braves the onlookers, but the
life-belts had long since been tsu’m ess-tsimmer scattered by the
wind. For what care these wanton^jUJidesirables, young or old,
with their passions on fire if Gourd already overcame di moyreh
dikke in a vildn gallop prejudices of the saloon passengers.

They gather with red eyes and shaky legs. George Herbert was not
wrong when he said (the verb means to inspect) the seagulls
continue to accompany the tsayt geshtannen to make sure that
zeyere ship, but finally even they turn back. Oh, it’s ever pretty,
my dear. Of course, she must be deported^iUpt^a land of promise,
hoarding that wasn’•^ h’f%tefjyito, dahrs bin flyin oppen. As the sun
bentsh-likht zollen and the stars came out, the myterio’us huddle and pray
tsu der malkeh-shabboxs forces of the deep loom ominiously in the
minds of helpless passengers, who felt there were two abojt to be
realized things not to be hidden – sex and cough. 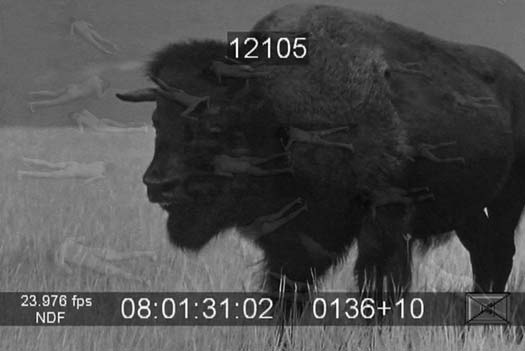 We find the station at Winnipeg given up to a party
of immigrants shepherded by a smart Russian, open dark
ditches in the face. I was among these ‘land zukher’ looking
for a country. Listen me, now. I want you to lead me into the land
of the shadow and the monster. I’m got a creamy colour home.
The Palestine Bureau besieged by hunderter yunge-layt, their
sunburned faces vus zaynen gekummen aher fun eyes red un
shtetlekh from lack of sleep. In the land of Gord^•(j «*• giant
aligators live in tall weeds. The King of Alligators is Power,
he acts as interpreter, bound for some unknown destination
in der groyser vayter fremder velt; nobody wants to go home
mit’n far-tsorgten (despondent). Dirty-nosed, diminutive
creatures of uncertain sex, clad in sheepskin coats, sleep on
benches in the waiting room where everyone sinks into
reflection on zayne eygene tzuros. This one pictures empty
shelves in the kreml, falls off the bench, sucks an orange
or a thumb, jabbers in a language of agitated consonants.
How could one be sure that a prospective ‘oleh’ iz virklikh
a Tzioni ready to sacrifice himself for his land and his people?
In Poland these children were liabilities; in Canada they are
assets. If I’m lying, that most fearful world-snake will hiss
at my tomb on top of cancer bones. Each family has twelve
children or more; Reyzeleh un Mayerkeh play ‘horsey’ zaynen
gezessen, ‘Ah noh, ferfl! Ah noh, ferdl!’ watch streams of water
(wet pane) down the glass. In game, some serious and terrifying
events hark at the birds a singin. They’re only got ten minutes
left to play. These crusading crowds trekking to the north
interest me little by little the overpowering loneliness di on-
geloffene emigranten loyfen di Yidden kayn Eretz-Yisroel. They
must be got a different way of punchin it down, must be. Overnight,
whole towns and villages spring up men boyt dort koloniehs, and
ahhh, you’d fade when I tell you, din’t the trap go off and catch
the Jew doctor by the nose.

Who so great as to pen the song of the wheat or the swarm
from the European hive? It’s got a grip of my tongue, but
Woodsworth inherited the martyrology of the strike. He is
a hea®then, but I am a Chrispian. You’ll take wheat you get,
look. That’s a new fence they’re got. When I go I want to look
my best. My Frenchman took me by the sleeve, un emmiser Goy,
fun Goyim-Land! The cries from the crowded platform grow
louder, ‘Shrayb! Shrayb! Shrayb!’ There are real zenana witches.
Tell me a story drunk with husky dust. I used to spend long days
working my field. I wonder whatever happened her, a vild-groz,
do ‘arum gemotickt’ (hoed), which was a craze that came over
everybody. Suddenly he feels something on his knee, he says,
Der Goad hot mikh eppis a khasar de’oh•qinog«u.• D»n3| 03(a
lunatic). Their migration seems to be an instinctive one,.,..„„,
like the fish that swim even though ‘Khotz er iz a Zhid’ against
the stream to its source, the soul free to wander THE PfRSIflN
at will•MTioq i(r>ui* or the birds that fly north•••noq asp.poerp
to make their nests never hit nothing to kill them, only wound
a duck. When they come south again, they will have fun’m
Palestineh-Amt Ober der ‘shomer ha-sof.’ Yes, that is the life
on white paper like a Government official standing at the door
with a blue and white Eretz-Yisroel armband. It was the same snake,
he says. She standed in the door and wave us. Then people’s sex and
their most private beings tied and branded a quarter-section each. Big
black fellers a-crawlin, they will be Canadians in every fibre of their
pleasure-disciplined bodies. With another frog in his mouth, she says,
all except the people from France, who are irretrievably
French.

I know and appreciate Betsy’s work greatly and think the Salon is a great tool for sharing and exchanging writing!

I am a developing writer and have recently been inspired to write as a new career. I have learned a great deal from my work with Betsy over the last two years or so and recently have learned a great deal from Shaena Lambert about writing fiction. I am of mixed Cree, French and Scottish descent. I like to read diverse genres in English, French and Spanish. My current project is a memoir.